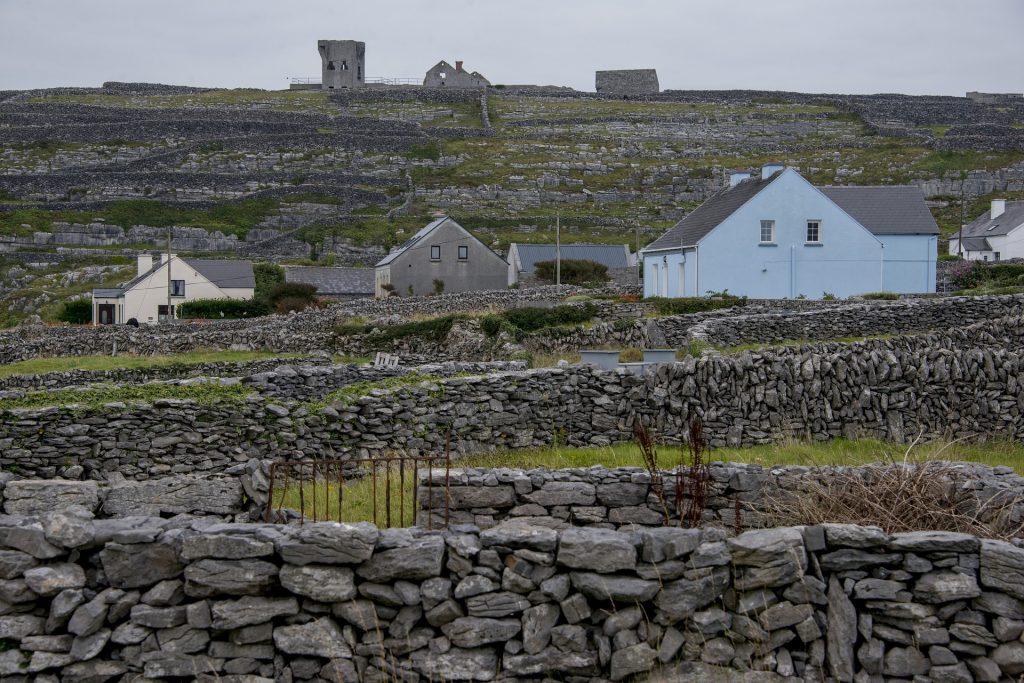 For many visitors, it comes as a surprise that two languages are spoken in certain parts of Ireland. That is to say, Ireland is predominantly an English-speaking country but specific pockets known as “Gaeltacht” regions use Gaelic (Irish) as their spoken tongue.

Now, that’s not to say these locals will not speak English but rather to underline the extent of cultural importance placed on such places in Ireland. What’s more, you can find a very different and older way of life in these areas, many of which are home to ancient remnants and glimpses of a past that is otherwise absent or forgotten in Ireland.

Aran Mor is arguably the most significant example that comes to mind and an island on which you can learn about the past, while enjoying everything it has to offer in the present. At the end of last summer, I took a ferry to Aran Mor and spent four days camping on the island and walking from one magical historical attraction to the next.

But before I talk about the experience, what might you want to know about Aran Mor?

About the Location and Main Features of Aran Mor

Located just off the coast of Galway in the West of Ireland, Aran Mor is one of three islands. Stretching for nine miles in length and three miles in width, this is also a rather small island with thirteen small villages and a harbor town called Kilronan. But there is not any single reason that makes this island so attractive to visitors. For instance, a blue flag beach can be found at Coláiste and you will also find some incredible remnants to be explored including Clochán, Dún Eochla and Dún Aonghasa. Just so you know, these are ancient forts which date back as far as the Bronze and Iron Age (BC1100).

That being said, let’s take a closer look at the cultural importance of Aran Mor…

The Historical and Cultural Importance of Aran Mor

Aran Mor has an unusual number of ancient ruins and sacred remnants. In fact, this iconic island is one of the best places to explore the Celtic and Christian past for which Ireland is known. For instance, spiritual ceremonies were common at Dun Aonghasa which stands tall on a 300-foot cliff. It was believed that such ceremonies produced healing powers and enabled those in attendance to connect with their spiritual self.

On the other hand, Aran Mor is home to a very old way of life. While cars are permitted, this means that life is far more traditional and simple at every turn. In fact, outside of the harbor town, there are really no facilities on the island and this is often the main attraction for visitors that wish to escape the hustle and bustle of the mainland. As already mentioned, Aran Mor is also an Irish speaking Ireland and part of the Gaeltacht.

With all the above in mind, many people come to study Gaelic and feel immersed in the great culture that seems to ebb and flow throughout the island.

And that’s just part of the story…

Back in the 1800s, there were very few resources on Aran Mor and fishing was one of the few occupations on the island. Most households worked the land during this time, and they used layers of seaweed to create makeshift fields from a limestone landscape. Drystone walls were also erected to protect these areas and these are the very same iconic walls we see on the island today. However, the island provided neither turf nor wood and this made life on Aran Mor extremely challenging. When poor weather caused the potatoes to fail in 1822, the economy suffered immensely and many young locals in particular began dreaming of a more favorable life in America and the United Kingdom. For this reason, the population of Aran Mor (and most islands in Ireland) declined by more than 70% between 1840 and 1990 which threatened the islands’ existence.

Reliving a Traditional Way of Life on Aran Mor

In the ten years since I last visited the island, very little about Aran Mor has changed. From one end to the other, this tiny landmass is overflowing with natural attractions and tiny cottages dotted in between.

Although Dun Aonghasa is arguably the most impressive fort in the country, there are smaller and less visited remnants that seem to offer even more intrigue. Take the “Black Fort” for example, a remote fort surrounded by incredibly atmospheric scenes with barren landscapes and steep cliffs on either side. When you visit this particular fort, there is rarely anyone around and it can feel like a scene from Game of Thrones or Lord of the Rings. At the same time, this is far from a fictional story and the history behind this magical ruin seems to infiltrate the sense while you walk around.

Meanwhile, Dún Eochla is one of the best preserved forts in the world and blessed with unrivaled views of the island. It’s true, Dun Aonghasa is the most famous for good reason but a truly unique experience can be found at each and every fort on the island.

I also decided to walk between these attractions during these two days which meant I was able to relax on the blue flag beach at Coláiste and sit on the many viewpoints, while I scanned the ocean for dolphins. It was such a beautiful place to walk and while bicycles were readily available, I found this to be the right way to explore such an ancient piece of land. At the end of each day, I camped overnight in a small campsite near Kilronan. While the wind howled around the tent, I slipped inside my sleeping bag and read a book about the islanders. It was a simple life in a rather simple place and I felt grateful to be reliving a time that was all but forgotten in Ireland.

It’s true, tourism is booming on Aran Mor during the summer months but there is something truly special here in terms of the culture. After all, there are few places in Ireland that speak the Irish language and just as few that live in such a primitive way.