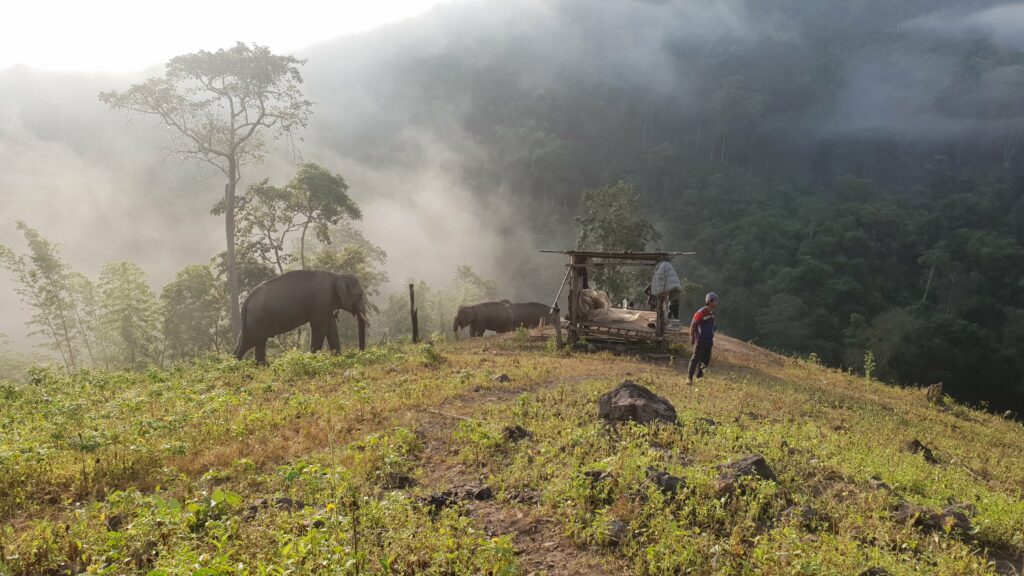 By Bianca Caruana | May 10, 2021 AsiaSocial Responsibility

In a small town in the southwestern region of Nepal, Eva the rescue elephant and her new companion Lhamo are sprouting a charming kinship. Unbeknownst to the two, the world around them has changed quite drastically. Nepal — a country that attracted over a million tourists in 2019 — closed its borders at the start of the pandemic. It will be some time before the country can recover from what has been lost.

However, for Eva and Lhamo, daily life hasn’t changed too much thanks to the commitment of the people behind Stand Up 4 Elephants (SU4E), an NGO dedicated to improving the lives of captive elephants in Chitwan National Park. I met co-founder Floriane Blot back in 2019 while visiting Nepal. My curiosity about the treatment of domestic and semi-wild elephants drew me to one of the country’s few sanctuaries for rescue elephants like Eva. At the time, Eva was fairly new to the sanctuary. She was rescued by the team at SU4E and undergoing care and rehabilitation for major abscesses on both her feet, caused by the poor duty of care from her previous owners. In many places in Asia, elephants are property and high value. They are a way for locals to earn income — whether that’s through tourism-related activities such as elephant riding, or agricultural activities such as logging and farming. The domestication of elephants in Asia is a long-running and complex social intricacy that can not be dissected in any one-sided argument, but I wanted to speak with Floriane and other sanctuary founders in Asia to learn about how COVID-19 has impacted their work and shifted the narrative for the domestic and semi-wild elephants they care for.

Thailand’s elephants return to the forests

Fourteen hundred miles to the south of Nepal in Thailand’s northern region of Mae Chem lies the Kindred Spirit Elephant Sanctuary (KSES), an NGO dedicated to bringing Thailand’s elephants home to the forest. When I visited KSES back in 2018, co-founder Kerri and her team were caring for five rescue elephants and the care was funded by their own community-based tourism initiatives, as well as citizen science conservation trips in partnership with Biosphere Expeditions. In March 2020, these revenue streams depleted. With no monthly income, the NGO turned to community donations for assistance.

“Last year, we welcomed over sixty elephants to our forests due to the closure of camps nearer to the city,” Kerri explains. “Here in the forests where the elephants originate from, mahouts and owners without income can take better care of them.” With very few tourists left in Thailand, these sixty elephants are likely to remain in the care of KSES for the foreseeable future. “We are doing our best to support the elephants and mahouts through this difficult time.” KSES fundraising efforts have provided much-needed respite and helped to cover monthly running costs which can exceed $11,000 USD. However, the small NGO cannot sustain the long-term support of over sixty elephants. “We hope to take in a few of these elephants to our program full-time once tourism opens again. If we can raise the funds needed we hope that plans will surface to set up more eco-projects nearby, to keep as many elephants as possible here in the forests.”

Pre-pandemic, the treatment of elephants in camps gained widespread media attention and pressure emerged from the tourism industry for ethical reform. Kerri hopes that this focus will continue post-pandemic: “This pause has given people a chance to rethink elephant tourism. We hope tourist camps can implement a more ethical approach but this will, in the end, be defined by tourist demands and the ability to practice sustainable tourism.”

In Cambodia, sanctuary owners have also turned to fundraising efforts. “It has been very difficult at the Mondulkiri Project since this time last year,” says founder Lee. “We went from income to no income overnight and have since started an elephant sponsorship program to help pay for wages, veterinary care, land rent and food for the elephants.”

In 2019, Cambodia saw a major shift in the treatment of elephants when the management of the symbolic Angkor Wat temples banned elephant rides at the park. An online petition to end elephant rides at Angkor Wat, which gained over 185 thousand supporters, was the catalyst for management to send their fourteen resident elephants to the nearby Bos Tham forest. This trend of tourists’ concerns for the treatment of elephants mimics what we are seeing in places like Thailand, where elephant riding has become a controversial attraction.

A hope for systemic change in Nepal

Back in Nepal, Floriane and her team are using this time to campaign for more ethical treatment of these animals. His sanctuary, Stand Up 4 Elephants, is one of the first in the area to adopt such an ethical model where tourists come not to interact with the elephants but to learn their stories. He believes through education others will follow. “Because of the current [border closure] situation, some elephant owners have come to us to learn more about the sanctuary model and how they can build back better.”

Habitat loss and the historic role of elephants as property mean that change will take time, but Floriane remains positive. “The reality is this is something that you can not achieve overnight but, from what we can see, both the local people and the government are willing to listen and rethink the role of elephants in tourism.”

2 thoughts on “Cause for a change: The post-pandemic future of Asia’s elephant tourism”