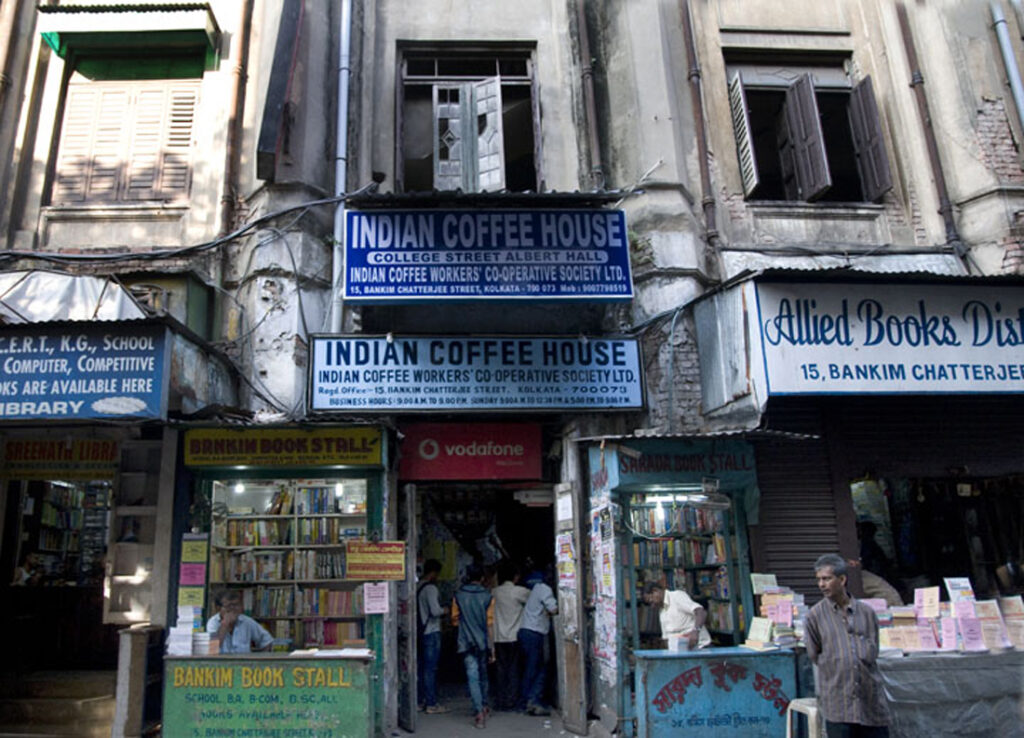 A constant buzz of chatter drifts around the huge hall, arising from the groups of men and women seated around the wooden tables. Turbaned waiters glide around in an orchestrated manner, replenishing the supplies on the tables. The nutty whiff of coffee hits me as delightfully as the noise.

I have come to College Street Coffee House, an iconic café in Kolkata, India, after many years. The small but cavernous entrance of this 19th-century building and its dank staircase has remained just the same. The interiors have been done up with a fresh coat of paint. A fresh, chic look has percolated into its old-world ambience with frescoes and terracotta tiles on the walls and a shiny brown polish on the doors and windows. But the hundred-odd people, seated around the tiny tables in groups of three to eight, engrossed in their animated discussions, collectively reaffirm that Coffee House remains Kolkata’s refuge for caffeine-fuelled conversations.

The rambling mansion was built in 1876 where the Coffee Board had decided to start a coffee joint in 1942. Later it was rechristened as the Indian Coffee House, making it a part of an expansive chain of about 400 outlets across India.

But while most of the other outlets remained a place for downing a quick cup of joe with friends and family, the Calcutta College Street joint integrated itself into the city’s cultural landscape. The kilometre-long stretch of College Street housed some of the oldest and finest academic institutions in the country, besides being a thriving publishing hub. Perched right in the middle of it all, the café quickly turned into a melting pot for students, budding poets, aspiring artists and the literati.

The café brews such a cauldron of creative energy that it has remained on the itinerary of every city visitor. From a young, beatnik Allen Ginsberg who, in the summer of 1962, spent most of his afternoons here hollering with Jack Kerouac and a firebrand group of city poets to Gunter Grass, who was a regular during his five-month sojourn in the eighties – this bustling two-storied hall with the high, vaulted ceilings has seen it all.

“And the legacy has continued,” says Amit Sen. It is just past 11 on a Saturday morning. The place is already bustling with regulars and I fail to spot a vacant table. Sen offers me a place at his table, where he is waiting for his friends to arrive. A retired professor, the septuagenarian has been frequenting Coffee House since 1966, when he was a college student. Post-retirement, Sen has retained his routine of returning to his stomping ground for a three-hour weekly session at the Coffee House with his friends.

“In many of these tables, you will find real estate brokers finalizing a deal with their clients, or people have dropped by simply for a quick, cheap weekend snack. But there are quite a few tables, where editorial meetings for the next issue of a literary magazine are on, in all earnestness,” Sen tells me. He points to a table near one of the windows that overlook the busy street below. A man, in his mid-thirties, is furiously typing on his laptop. “Anirban is working on his next theatre production. He left his teaching job in Canada three years ago, to continue his role as a writer-director of a city-based theatre group. That table has remained his workstation ever since.”

Sen’s friends arrive and I take leave, quickly finishing the cup of dark, strong coffee that my table-host had ordered for both of us. The black coffee is the staple drink for regulars and simply called Infusion here, extracted by percolation brewing in a traditional Indian filter. If you want a milk coffee, they will simply mix boiled (but not frothed) milk to the brewed infusion.

I climb up to the upper floor, which is built in an open verandah style, overlooking the lower-floor hall. I have always liked the airy feel up here, though the lower floor remains the first choice for regulars. Saikat waves at me from a table in a far corner. An old acquaintance, Saikat lives nearby, and always prefers his mid-morning cuppa here at the coffee house before he begins his day job as an independent adman. I join him at his table and get introduced to his friend Susanne, a New-York based copywriter. On her third visit to India, and her first in Calcutta, Susanne is intrigued by the Coffee House. “This place is a world away from the clichéd motifs of poverty and exotica that India gets always associated with!” she says. “It is as if I am getting to see a slice of the everyday life of the educated middle class, who loves to have a chat over coffee.” Susanne adds with a laugh, “Though I must say, the coffee isn’t quite that great.”

“But the conversations are,” Saikat chips in. The adman is a coffee connoisseur and he knows that the coffee profile of the College Street Coffee House is no match for the brew served in the artisanal cafes, where quality is the buzzword and the roaster is willing to pay a premium for the quality. The coffee scene in India is increasingly witnessing an emphasis on the fine craft of custom-brewed, single-origin coffee. This Coffee House is not quite in sync with that trend. This ubiquitous chain still works with blended coffee and the beans are never ground to individual orders.

Still, Saikat prefers to have his first cup of the day at this place, where he says “the titbits of conversations on films, theatre, poetry wafting in from the tables around sort of kickstarts my day.”

Susanne smiles – “It reminds me of the stories of the scruffy charm of the spoon cafes of New York back in the 1950s.”

An elderly waiter, looking suitably archaic in his starched, well-worn uniform and red-and-gold turban, approaches our table. He ceremonially proffers the menu card that has the same choices this Coffee House has been offering to its guests for years. I order a chicken sandwich and a cold coffee. It is the no-frills, classical chicken sandwich with a coat of butter and a dense layer of seasoned, boiled chicken inside. The old-fashioned cold coffee – chilled, served in an unpretentious tumbler – pairs very well with it. I decide to sign off with the house delicacy – Chicken Afghani. A deep-fried chicken cutlet, with a crispy, fluffy coating of a whisked egg, this signature dish always wins me over with the hot, thick tomato-based brown gravy spread generously over the cutlet. As I take a tentative bite, I realise that quite a few things at the College Street Coffee House have remained exactly the same.