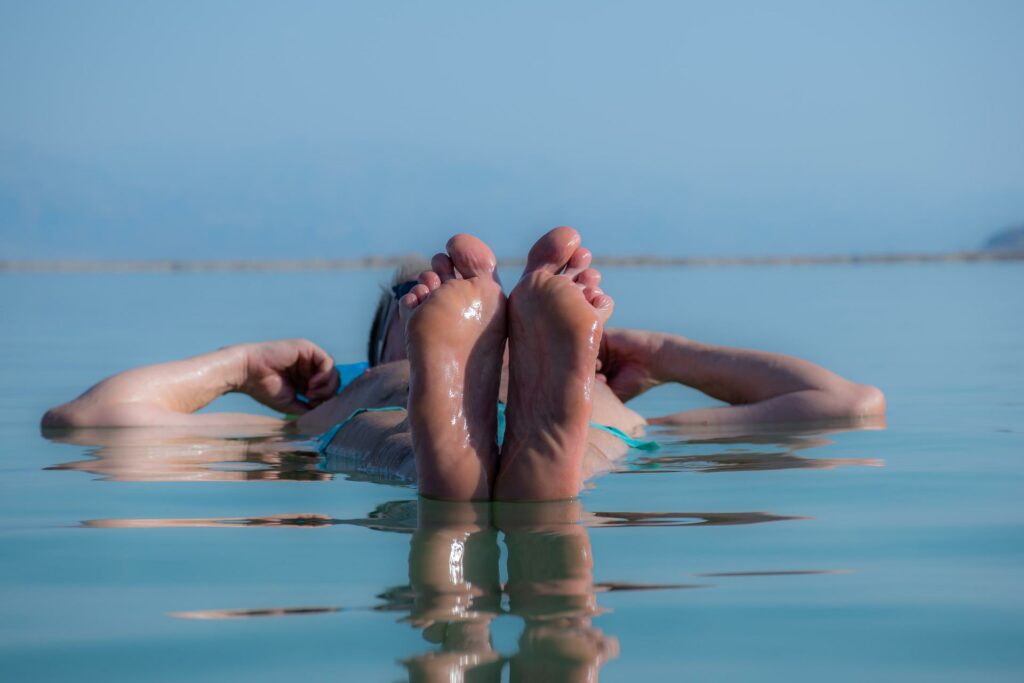 Standing at the world’s lowest point

It was a hot summer day when I left Jerusalem to travel south towards the Dead Sea, an indescribably beautiful salt lake, sitting peacefully landlocked between the countries of Israel and Jordan. After spending five days in Israel, I was impatiently waiting for this next section of my road trip. Although visiting Israel had been on my bucket list since forever, the Dead Sea had always fascinated me the most. Crammed into a rental car, a Mercedes Smart that was way too small for me, I first made my way towards the lowest point on earth. Once there, a fascinating feeling overcame me when I stood next to a huge sign pointing out that I was 416 meters below sea level. It was hard to comprehend just how much this measurement actually meant (the length of 4 soccer fields, wow!).

While heading down a rocky mountain road towards the water’s edge, I had to constantly watch my speed. Not only due to the somewhat steep downhill sections, but also because of the mountain goats frequently appearing all along the way. After coming to a full stop in the middle of the road, I watched what seemed to be the most relaxed animal on earth slowly making its way across the road from right to left. As my head slowly turned and my eyes followed the animal, the Dead Sea suddenly appeared in my field of vision, shyly presenting itself in the distance behind the mountain goat.

Arriving at the Dead Sea

Just one and a half hours after my departure from Jerusalem, I arrived at one of multiple parking lots along the Israeli side of the Dead Sea. For the last 20 minutes of driving, I hadn’t been able to take my eyes off the water (I know, eyes on the road!). There was something about this place I couldn’t grasp. Maybe its mystical blue color? Perhaps the haziness gently covering the water like a blanket? Or the awesome color contrast between the water and the surrounding red, Mars-like landscape? I still don’t have an answer. All I remember is that it felt very different from any place I’d visited before.

Time to float in the Dead Sea

Obviously, I had read a lot about the Dead Sea prior to my arrival. I knew lots, in theory. For example, I knew that the high salt content in the water should make me float. But reading about it was one thing, and experiencing it was a whole different story. Whereas I’d imagined just peacefully walking into the water to pose for a picture, my first dilemma came when I didn’t even see a suitable entrance point. When I reached the clear water’s edge, I thoughtfully looked down and watched the tiny waves splashing as they hit the solid salt crystals lined up all along the coast.

Eventually, I made my way into the water. What I felt first was nothing but confusion. Not only did I float (that much I’d anticipated), I was pretty much unable to control my body. The abnormal water composition made it hard to perform standard procedures, such as turning around, balancing my bodyweight to land in a specific position, or swimming in general. I felt like I was using my body for the very first time. After about 10 minutes in the water, I was finally able to stay in a halfway stable position, so I asked my wife to snap a picture, then headed back towards my initial entrance point.

There was just one little thing separating me from the comfortable, solid ground my wife was waiting on: Salt crystals. Whereas I had easily stepped over them when entering the water, I was now in a floating position. The only way of getting up was to hold on to the large salt aggregates at an exact moment when no wave was pushing me from behind. A few tries and cuts in my fingers later, I was back on my feet.

Once I returned to the rental car, I followed the Dead Sea along the shoreline and stopped at various places to take more pictures from different angles. Between the stretches of truly spectacular scenery, there were also multiple spas located alongside the shore. Since there was not really much else to do, my wife and I decided to get one of the infamous Dead Sea mud masks, advertised to extract toxins and impurities from our skin. Although I didn’t feel any different after this muddy, weird and funny experience, it was still definitely worth the stop.

Beyond its war-related presence in today’s media, I found Israel to be an extremely interesting, informative, inviting, and friendly country to be in. Suitable for all sorts of traveling (from budget backpacking to luxury), this place offers so much. However, between the Wailing Wall of Jerusalem and the scuba diving in Eilat, a stop at the Dead Sea is definitely a must for every visitor.