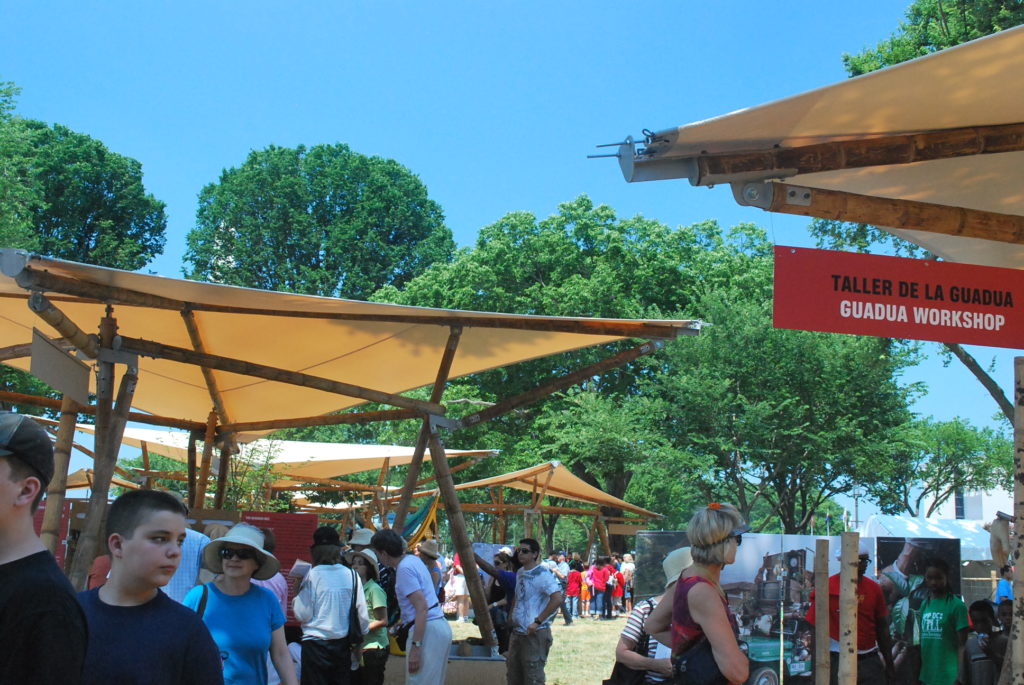 My first day interning at World Footprints was very educational because I was able to attend the Smithsonian Folklife Festival that featured the country of Colombia. It was exciting, especially because I have never traveled to Colombia and my experience at the festival was amazing. I was able to absorb a lot of information at the festival because it was divided by the bio-cultural diversity of Colombia, so the rest of the visitors and I were able to feel like we were in the actual country, rather than in Washington D.C. at a festival. It also gave guests the opportunity to thoroughly learn about one region of Colombia at a time.

At the festival, I learned that Colombia is divided into five different cultural eco-systems: The Highlands, The Lowlands, The Pacific Tropical Rainforest, Momposino Depression, The Coffee Region and the South Eastern Plains . This means that Colombia is made up of regions, and each region has their own climate, geology and cultural background. The Highlands use traditional materials to create modern art, because as a region, the people are trying to adapt to the 21st century, but with traditional methods. This way, the Highlanders are able to trade and relate to modernists, while still holding on to their roots, culture and traditions. The Highlanders use clay for pottery, and sheep wool for threading and quilting fabric.

At the festival, dozens of Colombians were demonstrating the process of making pottery, and threading quilts. It was interesting to see the entire process happen. First, the wool had to be detangled from a bundle of wool to a very long single strand that the artists were able to work with.  This was done by an intricate-looking machine that was made from wood and other basic materials, which are assumed to be used from the natural resources that can be found in the Highlands. Each region has its own culture and purpose.

The region that I think was the most popular at the festival was the coffee region. It is said to that Colombian coffee is the best in the world, and the festival showed visitors exactly how it was made. Colombian coffee farms sustain approximately 550,000 families each year.  Colombian coffee trees are picked twice a year.  A small quantity of beans can be picked in the months of April and May, but the main crop is during September. Coffee trees are annuals and one tree can last up to twenty one years.  The festival walked guests through the entire process, starting from when the beans were picked from the tree, and ending with the beans being brewed, as they would be after retail. It was very interesting to see everything that the beans go through before they arrive on our grocery store shelves, completely packaged, because we typically do not think about what it entails to grow coffee beans. To the Colombians in the Coffee Region, coffee is literally their lives. Their income, their jobs, and everything else depend on the coffee and I find that so interesting.

The Region that I personally found most enjoyable was the Pacific Coast of Colombia because of the culture. The Pacific Coast celebrated African culture and tradition. The Balsadas, which are the rivers of the Colombian Pacific, are used for celebrating and travel. The Balsadas are important and are used for multiple reasons. One obvious reason is trade and transportation. Gold is traveled through the river, along with other goods. In addition to trade, the river is used for traditional reasons as well. Ceremonies with boats carrying holy images, like St. Francis and St. Anthony, are sent out in the river while the Pacific Coasters send them off with traditional song and prayer. It is tradition to sing as an expression of both celebration and death. As a person that has never visited the actual country of Colombia, I have to say that I was extremely impressed with the festival. I learned a lot about the country’s culture, traditions, and way of life and it really made me want to visit Colombia in the near future. The festival gave visitors a glimpse of Colombian culture, which is enough to make visitors become intent on traveling to the country. The festival was overall, very enjoyable and entertaining.

Melissa Johnson is interning as a production assistant with World Footprints.  She is attending Towson University.