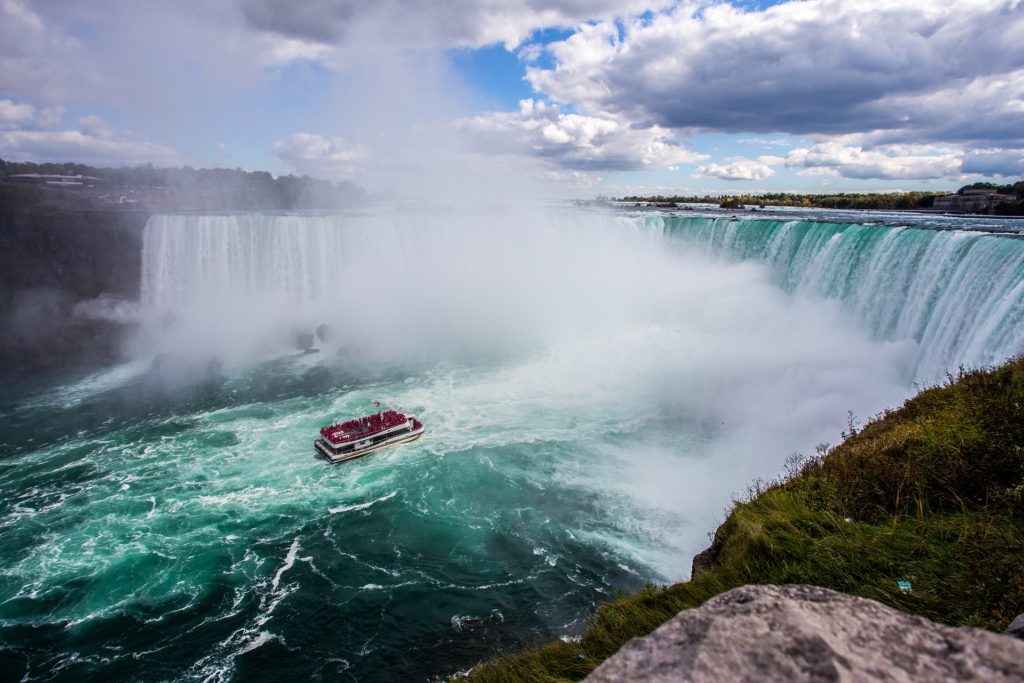 Niagara Falls, one of America’s most scenic wonders, wasn’t always a pristine park open to the public. Comprised of three waterfalls that straddle the U.S.-Canadian border, the falls have a long history; not all of it pretty. Industrial factories once marred their astonishing grandeur and their spectacular views were restricted. A remarkable invention by Nicholas Tesla and a 19th Century Public Park movement transformed the falls into an iconic American park.

The Formation and Discovery of the Niagara Falls

Niagara Falls formed during the Ice Age about 12,300 years ago. The three falls: Horseshoe, American and Bridal Falls, lie in northern New York state and the Canadian province of Ontario. Native Americans revered the falls, including the Seneca who lived nearby and believed gods, both good and evil, lived in it. In 1670, a French priest, Father Louis Hennepin visited the falls and he is believed to be the first European to write about them. By the 1800s the newly opened railroad system brought visitors to Niagara Falls, which brought the beginning of tourism and industry.

With the rise of the Industrial Revolution in the early 19th Century, capitalists realized they could harness the power of the falls to increase their wealth. They built a power plant in 1895 using direct current (DC) that could transmit electricity 100 yards away. As a result, ugly mills and factories were built on the banks of the river to capitalize on the current.

Visitors still came to see the falls, but they had to pay to view them. Hustlers began selling all sorts of photos and cheap curiosities turning the falls into a “Tourist Trap,” one renowned for its seediness.

An Invention that Would Change History

In November 1896, Nikola Tesla, a Croatian scientist and electrical engineer, developed a different way to use the power of the falls, the world’s first hydroelectric power plant. His system of alternating current (AC) electricity allowed long distance transmission.

Tesla proved AC electricity worked by transmitting power for the first time from the falls to Buffalo about 17 miles away. The system meant that the factories and mills no longer needed to be an eyesore on the banks of the river.

In the meantime, a “Free Niagara” preservation movement, started when the Niagara Falls Association, a group of concerned citizens, began a letter writing campaign in 1882 to turn the waterfalls into a park that would be free for all visitors. It was headed by notables like landscape designer, Frederick Law Olmsted, who was pushing to protect Niagara Falls from development and industrialization.

On April 30, 1885, New York Governor David B. Hill signed legislation to create the Niagara Reservation, making the falls New York’s first state park and the oldest state park in the U.S. The feat was accomplished by the state buying property from developers around the falls.

Today, that park is free and open to the public 365 days a year. There are many free attractions as a result of the “Free Niagara” movement that include views of the most scenic parts of the falls. Some of the attractions in the park cost money— but they are worth it. Two of the most special paid attractions are Cave of the Winds and Maid of the Mist.

Cave of the Winds

Cave of the Winds is an attraction that provides an up-close view of Bridal Veil Falls. Visitors enter through a museum where there is a film, The World Changed Here.” It tells the story of how the falls became a park.

Cave of the Winds is a somewhat inaccurate description since there no longer is a cave. There was a cave, located on Goat Island behind Bridal Veil Falls, but it was destroyed in 1955 because it was in danger of collapsing.

From the museum portion, you take an elevator down to the base of the falls. Then, wooden walkways take visitors up to a unique view of Bridal Veil Falls. As you ascend towards the falls, water pours down on to you. The raincoats and shoes the tour issues do little to protect you from this most powerful natural phenomena. The roar of the falls envelops you.

The last section takes you to “Hurricane Deck,” where hurricane level winds of 80 or 90 miles per hour swirl around you. At its top, you are almost within the falls. It’s an unforgettable experience!

When you emerge from Cave of the Winds, you can walk up to Terrapin Point, on Goat Island, a small island in the middle of the Niagara River between Bridal Veil Falls and Horseshoe Falls. The observation area offers a great view of all three falls. In the river below, you will see the Maid of the Mist boat, and its Canadian counterpart, the Hornblower, shrouded in mist and usually rainbows. You can look across the Niagara River to Canada. Nearby is the Top of the Falls Restaurant, a snack bar, restrooms, picnic area, and a statue of Tesla.

Leaving Goat Island, stop at Three Sisters Island, actually a trio of tiny islands. Follow the picturesque walk, which includes several bridges spanning the islands. Flocks of seagulls rest on spits of land among the rapids with miniature falls on all sides. When you reach the last part of the islands, you will have a great view of the Canadian Rapids and Horseshoe Falls.

Maid of the Mist

Maid of the Mist, which offers boat tours of the falls, is the state’s oldest operating attraction. It’s been running for more than 150 years. Maid of the Mist gives you a different perspective of the falls from Cave of the Winds. Instead of being up high near the top as the Bridal Veil Falls crashes to earth, you’re viewing all three falls from the bottom up. You board the boat at the Niagara Falls USA Prospect Point Observation Tower. The tower’s top offers great views of all three of Niagara’s Falls. It’s also a good bird-watching spot.

Niagara Falls is one of America’s most treasured natural wonders. As you enjoy the beauty around you, remember, sometimes Mother Earth wins out against Dollar Bill.