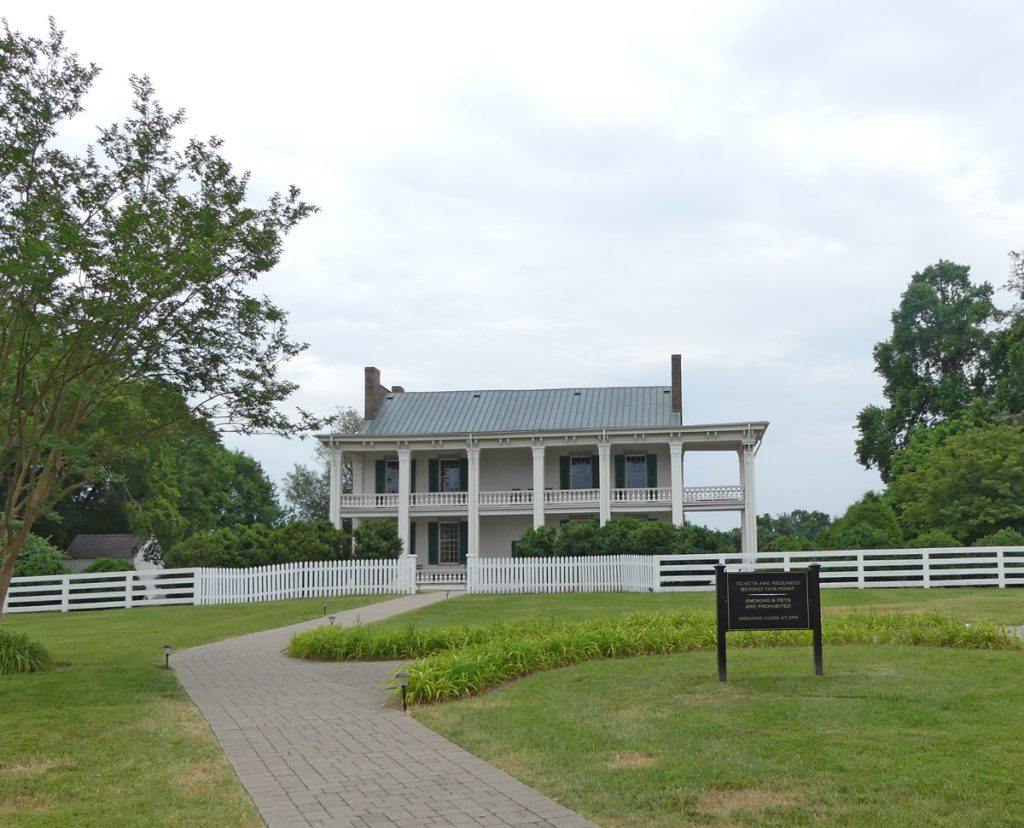 The battle of Franklin was a turning point in the Civil War. Most historians agree it was the beginning of the end for the Confederacy. The novel, Widow of the South by Robert Hicks, tells a fictionalized account from the viewpoint of a historical figure, Carrie Winder McGavock, whose family played a key role in its aftermath. But to get a complete picture of what happened in Franklin that day, there are three houses that history buffs can visit for insight into this important historical event.

Carter House, the home of Fountain Branch Carter, his wife, Polly, and their eight children, was at the heart of the battle. On November 30, 1864, Fountain and his family huddled in the basement of the simple, red-brick, Federal Style home he had built in 1830. Gathered on one side of his land, Confederate General John Bell Hood had over 20,000 men trying to retake Nashville. On the opposite side, Union General John Schofield had assembled about the same number to protect his hold on Nashville. Hood needed to get his men across the Harpeth River, which ran near Carter’s property, to take Nashville. The battle began at about 4 pm.

By the time the battle ended, the Carter House had over a thousand bullet holes in it. Battle of Franklin Trust CEO and historian, Eric Jacobson, who showed me around the Carter House said, “This battle was one of the most awful major battles of the war and the beginning of the end for the Confederacy.”

When Carter emerged from his basement, his house’s walls, and those of the property’s outbuildings were riddled with bullet holes. One of his sons, Tod, along with thousands of other men, lay dying all around.

The home was restored, and the outside walls of the back porch were the only place where I saw bullet holes from the battle.

The tour gives a sense of what the house looked like before the battle. The parlor is furnished simply. Family portraits hang on the striped wallpaper. There’s a sofa, some chairs, furniture that would have been used to store books, and other items. In the middle of the room, there’s a desk where Fountain Branch would have dealt with everyday farm affairs. The back room, called the sick room, is furnished even more austerely with a bed, armoire, sturdy dresser, and a few wooden chairs and a table. On the wall is a picture of Carter’s three sons. This is where, Tod, aged 24, was brought to die after being wounded only yards away.

Not restored was the small-frame farm office. When Eric led me there, the walls were so riddled with bullet holes they looked like they had a lace pattern rather than were solid walls.

The battle carnage required a large hospital to treat the wounded. Carnton, a nearby home and the residence of Widow of the South’s Carrie Winder McGavock, became that place. Built in 1826, the Confederate wounded were brought there during the battle until the rooms were filled. Then, they were placed on the porch. In the novel, Carrie alone nursed and watched hundreds of soldiers die and recorded their burial places, so loved ones might find them later and have some closure. In truth, her husband, John, was present and oversaw the care and burial of the wounded and dead also. Their children Hattie (age nine) and Winder (age seven) also helped attend the wounded.

The home’s historical interpreter, Brad Kinnison, led me through this beautiful Greek revival home furnished as it was in 1864. The entrance is a typical wide hall opening with rooms on both sides and stairs leading to the second floor. The guest parlor, the most formal room, is wallpapered and furnished elaborately. There is a gilt-framed mirror over the fireplace, a piano, and several delicately curved brocaded chairs and sofa.

A Record Book of the Dead

Another room downstairs that was used more informally has Carrie’s portrait over the fireplace. A portrait of Hattie at age 18 is on another wall. The clock and a music box are original to the family. One of the most interesting artifacts is the family bible. They kept newspaper clippings and photos stuck in it and recorded important dates. There are photographs of Carrie, John, and the two children.

In the upstairs bedrooms, the war becomes real for a visitor. In Winder’s room, there is a makeshift operating table. A saw similar to today’s hacksaw sat on it. Next to it is a table holding tools a surgeon would’ve used: file, pliers, probes, picks, and hammers. Where the surgeon would have stood, the floor is stained dark with blood; blood over 150 years old. In one corner of the room, there are excessive blood stains. Brad believes this is where amputated limbs were stacked.

Under a glass protector, there is the original record book of those buried in the cemetery just a few yards from the home. Part of the tour includes a walk to that cemetery, known as the McGavock Confederate Cemetery, where nearly 1,500 Confederate soldiers lie.

The McGavocks donated two acres adjourning the family plot and the slave graveyard for the Confederate dead. Soldiers had originally been buried on the plantation grounds but were reinterred here in 1866. Walking among the graves, which are divided into individual areas for each state that fought at the battle, are headstones sometimes only marked by initials. Many just say, “Unknown.” About 780 of the soldiers have been identified; the rest will always be anonymous.

In the years that followed the battle, the people of the South, both black and white, learned to live differently. The McLemore House tells some of that story. Ex-slave Harvey McLemore bought four lots from his former owner, W. S. McLemore, a former Confederate officer who subdivided 15 acres to form a middle-class African American community known as “Hard Bargain.” Alma McLemore, President of the African-American Heritage Society in Franklin, told me, “in spite of W. S. being Harvey’s former owner, they were friends.”

Harvey built a small white clapboard home there in 1880. The McLemore Family remained in the home until 1997. It is the oldest standing black-owned home in Franklin, Tennessee, though today, it is a museum.

Placards in the house tell of Harvey’s family in later years with stories about local people including his granddaughter, Maggie Mathews, who became a cosmetologist and operated a beauty parlor in the house, as shown on the 1940 census. Maggie remained in the house until her death in 1989. There are also artifacts and photos of African Americans from Franklin. One room contains records of Franklin citizens who fought for our country including a Tuskegee Airman and Buffalo Soldiers, African American soldiers who were stationed out west to protect settlers from Native American attacks.

Together, a visit to these three homes tells a profound story of the history of Franklin, a key location in America’s epic civil war.