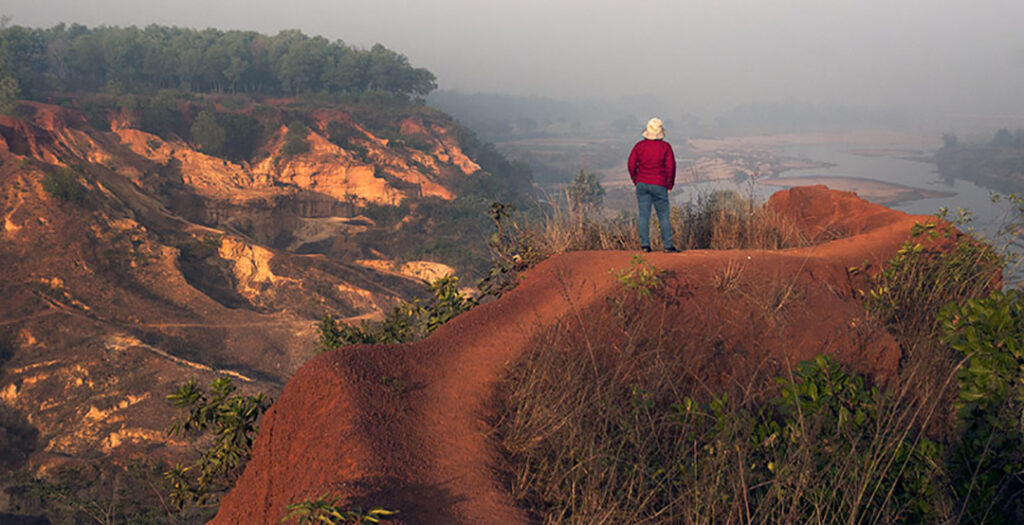 The foggy winter morning looks dull and uninspiring. The brownish patches of earth that lie on both sides of NH-14 look blank and sterile and the sparse vegetation that dots this rather dreary landscape of West Midnapore wears a wilted, wintry look.

A 4-hour drive from Kolkata brought us to the small town of Chandrakona, a settlement that rose to such prominence during the Mughal rule that it found a mention in Ain-e-Akbari during Emperor Akbar’s reign. Not much of the old glory remains, except some crumbling old mansions and a handful of terracotta temples in the forest-covered surroundings of the town.

We have left Chandrakona early in the morning and after a half an hour drive in the pale morning light, we steer through a dirt track flanked by thin groves of cashew and acacia trees. A few minutes later the car heaves to a halt at a clearing. We have arrived at Gongoni Danga, the grand canyon of Bengal. Gongoni Danga, roughly translated from Bengali, means red-hot land. In the scorching summer months, locals say that the laterite textures of the canyon seem to sizzle from a distance, hence the name.

And it is as if we have been magically transported from West Midnapore to the Wild West! A strip of red-rock land leads to a precipitous drop to the valley below and a row of pointed laterite cliffs, their crimson contours highlighted with a dulcet glow in the morning sun, seem to fill up the horizon. Far below to our right river Silabati meanders its way through the canyon floor, floury-white sandbanks interjecting its crystal clear waters, forming beautiful patterns on the river bed.

“In summer and winter, the water is mostly knee-deep. But in the monsoon months the river often spills into the depths of the gorge,” Sadhan, our driver who also works as a canyon guide, says. He leads the way to a staircase, built by the local municipality, which winds its way a little into the depths of Gongoni.

If the canyon looks magical from atop, from close quarters its myriad textures look almost surreal where wind and water have collaborated over millions of years to carve and chisel a rugged and ravened landscape of forbidding grandeur.

As we descend to the lower depths of the canyon, the colours begin to change. The rusty red gives way to myriad hues of yellow that range from a chalky pallid to a brilliant golden. Geologists opine that while the upper segment of Gongoni dates back to Quaternary Period (about 2.6 million years ago), which lends the rusty-red textures; the lower level of the canyon with its characteristic sandstone-siltstone was here from the Tertiary Period (about 5 million years ago).

Streaks of light filter in to illuminate the nooks and corners to expose nature’s own eccentric canvases that have randomly shaped up bizarrely beautiful shapes and designs on the rockfaces. We explore the meandering trails inside Gongoni, the route through which the river had once threaded its way and cut through the rocks to chisel out this 70-ft gorge. We shortly arrive at the edge of river Silabati.

A group of fishermen wade through the ankle-deep river and throw their hand nets into its crystal clear waters. “The nearby towns and villages get their fish from these fisherfolk. They fish in small groups using these traditional nets,” Sadhan informs.

We retract our path through the slopes, dotted with impossibly shaped towers and ravines, pockmarked with crumbling caves hewn into the mouldy rockfaces. It has been nearly three hours and it is time to unpack the breakfast boxes we have brought along. Sadhan points to a rather sinister-looking cave with carved pillars on its doorway, a little further up on a ridge. “Let’s go to Bakasura’s cave,” he says. And as we spread out on the little clearing in front of the cliffside chamber, Sadhan recounts a story, the myth that enshrouds Gongoni.

It was during the period of Mahabharata and at a time when the Pandavas were in exile for a year, traversing the country, their identities concealed. It was then the five brothers arrived with their mother Kunti here — a territory ruled and terrorised by Bakasura, a fearsome demon. His culinary routine followed a simple pattern: each day a person from a nearby village had to go to the demon’s cave (in front of which we are having a leisurely breakfast!) as his daily dose of meat. A Brahmin family had hosted the Pandavas and it was the turn of the head of the family to offer himself to Bakasura. Kunti ordered her second son Bhima to play the substitute. Bhima, a robustly-built warrior, gladly agreed to take up the challenge. When Bhima approached Bakasura’s den, the ‘fleshy’ meal whetted the demon’s appetite but the poor devil had little idea what he was getting into. But he was no mean fighter. A pitched combat ensued and lasted for several days before the monster was killed by the middle Pandava.

“And the prolonged battle that rattled the earth for a few days left this land all creased and battered” — with an elaborate sweep of his hand around, Sadhan finishes his story.