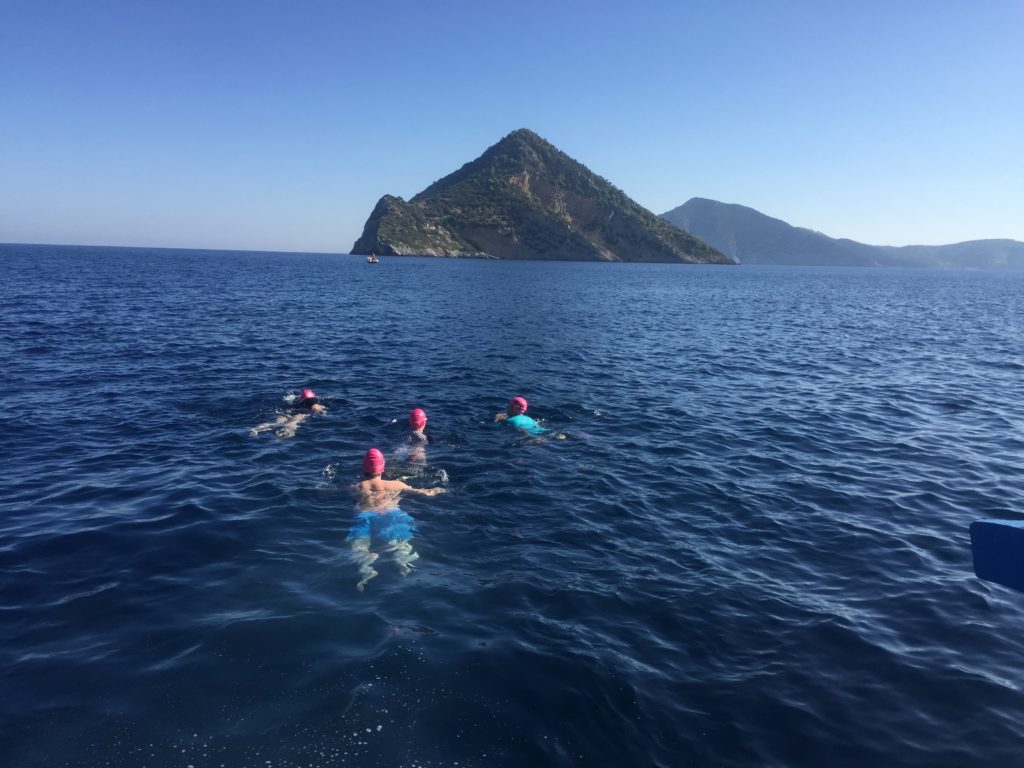 By Eliza Amon | January 21, 2022 EuropeAdventure Off the Beaten Path

“Ferries are for wimps,” our guide Tim’s t-shirt read. It was a motto befitting my tour groups’ plan to spend a week swimming 5km a day between and alongside the Sporades, a cluster of Greek islands in the Aegean Sea.

I’d traveled to Greece with four friends, some of whom I’d known for more than 25 years. We had been dreaming and plotting a “swimcation” for a decade and finally signed up with the British company SwimTrek, one of several organizations that offer swimming vacations around the world, including in The Maldives, Oman, the Galapagos Islands and Scotland.

The Sporades, an archipelago of 24 islands, only four of which are permanently inhabited, are known for their steep slopes covered in coniferous forests and small shrubs rising above rocky beaches with clear turquoise water. Most of the islands sit within the largest protected marine park in Europe, a 2,260 km area inhabited by the endangered Mediterranean monk seal.

It required two days of travel to reach this spectacular outpost. I flew from Seattle to England and from there to Skiathos, Greece and then boarded a 2-hour ferry to Alonissos, a hilly island with stunning views, near-empty beaches, a charming hilltop “old” town, and a low-key tourist vibe.

In the evening, we gathered on our hotel veranda for an orientation about safety and rules with our trip leader, Sarola, a former competitive swimmer from Ireland. Tim, a devoted surfer, and UK-based beach lifeguard was her number two. We also met the five other swimmers, all Germans who spoke impeccable English, who joined my group of friends, which included three Americans and one Englishwoman.

On our first morning, Sarola and Tim took us to the bay for a short swim test. They divided the nine of us into three teams and gave us swim caps in yellow, pink or orange, depending on our speed. The slowest team would start first allowing all the teams to finish together.

Next, we met Dmitri, our ship captain, whose traditional Greek fishing boat, the Konstantinos, was white with blue trim. After considering the wind and the tides, Dmitri set off for our morning destination, the nearby uninhabited twin islands of Dio Adelfi, or the Two Brothers. He pulled two inflatable motorboats behind us. When we arrived, Sarola spread out a map in the ship’s center island and charted our course. As each team dove off the Konstantinos’ deck, one of the boats shadowed them. Dmitri followed the third group.

It was early September and hot, with temperatures in the low ‘80s. The blue-green water was warm but refreshing. The sea was exceptionally clear, with unobstructed views of the rocky bottom. A school of finger length black fish darted away from us. Sea grass waved. As we swam through the narrowest passage between the two islands, yellow, limestone cliffs, covered in hardy shrubs, rose up on either side of us. Nearly blending in with the scenery were shaggy, brown mountain goats, clinging to the side of the cliffs. Far above us, the slender Eleanora Falcon soared above the clifftops. We swam about 3 km over two hours, a stretch that was punctuated by breaks for water and sports drinks.

Lunch was on the boat. Tim and Sarola prepared a spread of food bought locally, including fruits and vegetables. We spent a long, lazy siesta, eating, napping, chatting, and swimming where the boat was anchored. In the afternoon, Dmitri took us to another nearby island, Peristera. We swam a shorter distance, about 2km over an hour and a half.

This became our routine for most of the rest of the trip, though there were variations in our schedule. One day, we swam to a sunken ship and dove in and around it. Another day, Sarola filmed us swimming and gave us tips to improve our stroke. Several days, when we were near an inhabited island, we had lunch at a local restaurant.

My group of friends was split between the three teams, which worried me at first. I had, after all, planned a swimcation to be with them. But I soon realized that the mixing of the teams encouraged bonding among the entire group, and despite the separation, my friends and I still had plenty of opportunities to swim together.

Each day, we returned to Alonissos around 4 pm. Some swimcations are structured so that you sleep on the boat as you swim across an area. Others arrange for lodging at different hotels as you move from island to island. We enjoyed having Alonissos as a home base, and we had plenty to do in the evenings. We roamed the tangle of narrow streets and steep stairs of the Island’s old town, where climbing vines and flower gardens surrounded the stone houses. The restaurants had fantastic views of the other islands and over the coves and beaches below, as well as fresh fish and the famous Greek cheese pies on the menu. Other evenings, we ate at restaurants near the Island’s port and strolled the gift shops full of Turkish towels, evil-eye pendant jewelry and herbs and honey Alonissos.

The highlight of our trip was scheduled for the last day—a 5km crossing from Skopelos to Alonissos. This crossing was the biggest physical challenge of the trip since we would be swimming the entire 5km at one time, with only one break for water and snacks at a rocky outpost between the two islands. The swim was timed to avoid the ferries and other large ships that passed through this stretch of open water requiring us to swim efficiently, in a tight formation with our teams.

The morning of the swim, we designated a leader for each group, who would sight our crossing on Alonissos’ lighthouse, a lone beacon hanging onto the cliff side at the tip of the island. Departing from a rocky coast, we swam in a triangle shape, two of us flanking the leader. In this deeper water, where we couldn’t see the rocky bottom, the light bounced and refracted off the first few feet of the blue depths, making the sea dazzlingly bright, but opaque below us.

Open water swimming is an exhilarating experience. The physical challenge of the swim releases endorphins, but there is a thrill too in being so far from your normal habitat— land. We had a cormorant’s view as we glided across the top of the sea and a fish’s perspective when submerged beneath the surface. There is a pleasing simplicity to open water swimming as well. Your environment is reduced to three core elements—blue sky stretching above, warm, salty water surrounding you and falling below, and hilly, green land, a mass in the distance bisecting the two.

As I swam in a bullet-shape toward shore with my yellow team members, I imagined I was one of the black fish in the schools below. We were swimming in formation, a tight group, yet it felt like swimming as one. All three teams crossed successfully, in about three hours, leaving our afternoon free before a celebration dinner.

The following morning, we ended the trip with a sunrise swim. Walking down to the bay in the cool early morning, I was reluctant to shed my fleece for the salty, dark water. But it was worth it. As the first pink and orange colors poked above the horizon, the nine of us joined hands to greet the sun’s warming rays.