Mel Young, is recognised as one of the world’s leading social entrepreneurs by the Schwab Foundation for Social Entrepreneurship. It was when Mel and Austrian born Harald Schmied attempted to invent an international language to enable homeless people to communicate with each other around the world that the Homeless World Cup was born. They quickly realised one already existed – football. The first tournament was held in Graz, Austria in 2003 with 18 teams attending from around the world rising to 56 nations at the Melbourne 2008 Homeless World Cup. The Homeless World Cup is creating a level of change never before seen by social inclusion initiatives. More than 94% of participants say that it has a positive impact on their lives and 77% make significant changes in their lives as a direct result of their involvement, such as coming off drugs and alcohol, moving into homes, jobs, education, becoming coaches and players. It has triggered and supports grass roots football projects in over 60 nations involving over 30,000 players who are homeless in pre-tournament training and trials all year round. In 1993 Mel co-founded The Big Issue in Scotland, a weekly magazine sold by homeless people in the streets of Scotland now with a circulation of 40,000. With the success of The Big Issue in Scotland, he co-founded the International Network of Street Papers, a global network of over eighty street papers sold in every continent, of which he is Honorary President. The combined annual circulation of these papers is over 30 million helping 100,000 homeless or long-term unemployed people throughout the world every year. In June 2002, recognising the potential of Fairtrade as a successful tool to alleviate poverty, Mel founded New Consumer Magazine, the UK’s leading ethical lifestyle magazine, enabling consumers to use their purchasing power to change the world. Mel is the author of GOAL: The story of the Homeless World Cup. He has received honorary degrees from Queen Margaret’s University; Herriott Watt University, Edinburgh and Glasgow Caledonian University. He lives in Edinburgh, Scotland and is a lifelong supporter of Hibs FC. Homeless World Cup 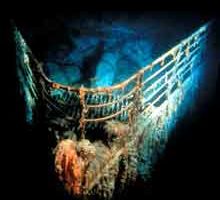 Per recent news reports, scientists from Woods Hole Oceanographic Institute embarked on a historic expedition to "virtually raise" the legendary TITANIC. Expedition Leader Dave Gallo joins World Footprints to discuss the expedition's mission and the efforts being made to preserve the Titanic. We've spent a lot of time talking about … Read more