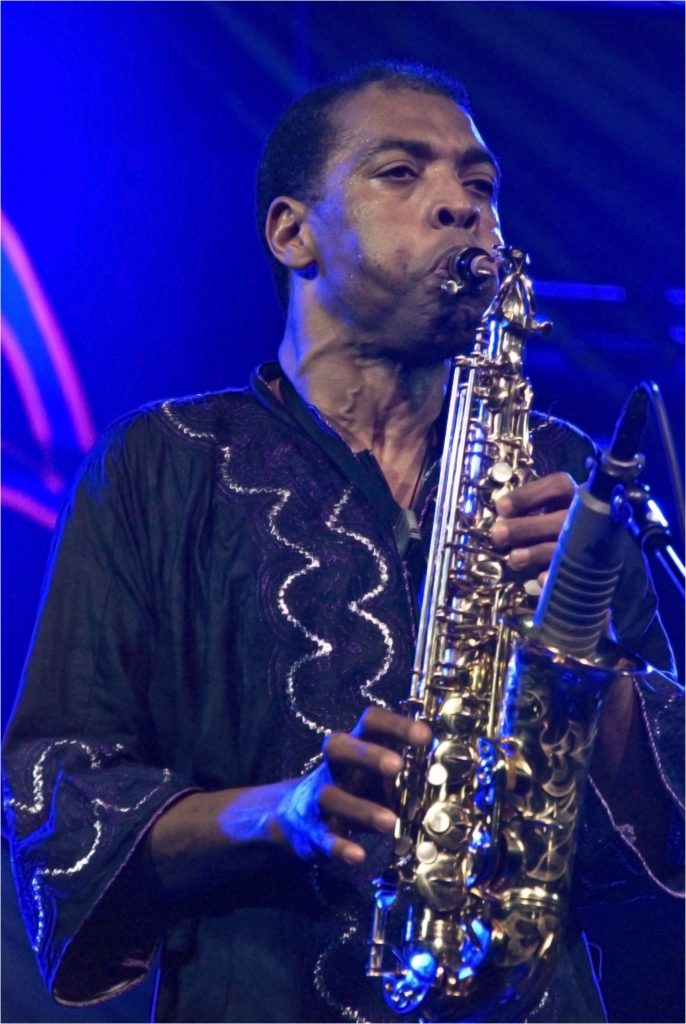 After thrilling audiences on three continents, FELA!, a three-time Tony Award winning powerhouse production, has arrived at Washington, DC’s Shakespeare Theatre to kick-off its U.S. tour.  Produced by celebrity powerhouses Shawn Carter (Jay-Z) and Will and Jada Pinkett Smith, as well as Ruth and Stephen Hendel, FELA! (pronounced FAY-lah) is the true story of the legendary Nigerian musician and activist Fela Anikulapo-Kuti.    Fela Kuti’s unique soulful Afrobeat rhythms ignited courage, passion and love against the oppressive and corrupt military government in Nigeria.  Inspired by his mother Funmilayo Anikulapo-Kuti, a civil rights activist, devoted his life and music to the struggle for freedom and human dignity.

The ensemble cast of Fela! is comprised of the best of Broadway and London’s Royal National Theatre companies.  Sahr Ngaujah masterfully portrays the title character and he keeps the audience moving.  Act I was like a big party.  The entire audience grooved and gyrated to the “clock” (you’ll have to see this production to understand what this means) and we were led in rhythmic chants of “Yeah-Yeah!” and “Original, No Artificiality.”  A principle figure in Fela’s life, American activist Sandra (Smith) Iszadore was played by LA based British born Paulette Ivory.  Her powerful voice rocked the theatre and drew us in emotionally and made us feel like we were a part of the struggle.  Funmilayo was played by Melanie Marshall.  She sang with such passion, emotion and conviction that the power of her voice caused many to raise their hands in praise.

Act II gives us a clearer glimpse into Fela’s life, which is sometimes comical, and conflicting struggles.  Instead of wanting to dance we were filled with a variety of emotions ranging from sadness to anger to determination and activism.  We gasped at the tragic and brutal beatings of Fela’s “queens” – the 27 women he married simultaneously, and the senseless murder of Funmilayo.  We experienced Fela’s confusion and desperate desire to seek clarity of his purpose.  We also celebrated with him and contemplated life while he smoked a large weed roll at his club in Lagos, The Shrine.

In addition to the extraordinary vocal talent, Fela! is directed and choreographed by Tony Award winner and Kennedy Center Honors aware winner Bill T. Jones.  The combination of talent is incredibly powerful and it leaves audience members feeling “empowered” in an interesting way. Fela! is one of the best productions we’re seen in a long time and it is “must see” theatre.   You’ll laugh, you’ll cry and you’ll certainly sing and dance throughout the play.  You’ll definitely leave wanting a little more.  Opening night gave us a wonderful surprise – the “real” Sandra Iszadore, who stopped by to join the celebration. If you’re in the Washington, DC area you can enjoy an evening of activism vis-à-vis superb theatre at the Shakespeare Theatre in Washington, DC until October 9th.   After that you can look for Fela! to open in your area.  Yeah-yeah!!

Want to know more?  Here’s a timeline snapshot of Fela Kuti’s life:
1938    Born October 15th in Abeokuta, Nigeria to a politically active and middle-class family.
1958    Sent to London to train as a doctor, but enrolled in the Trinity College of Music.
1961    Forms Koola Lobitos
1962    Wife Remi Taylor give birth to first child, Olufeta Olufemi Anikulapo Kuti, known as Femi.
1969    Took Koola Lobitos to Los Angeles.  His political zeal was fired when he befriended radical black activists Angela Davis and Sandra (Smith) Iszadore, with whom he would later record “Upside Down.”
1971    Fela renames his band “Afrika 70” (and later “Egypt 80”), and newly politicized, he determines to give a voice to Nigeria’s underclass.
1974    After he enraged the Nigerian establishment, the army almost destroyed Fela Kuti’s home while trying to arrest him.
1977    In a second government-sanctioned attack, over 1,000 soldiers descended on Fela’s compound, the Kalakuta Republic.  He suffered a fractured skull, arm and leg in the onslaught.  His 82-year old mother, Funmilayo was thrown from an upstairs window and she later died of her injuries.  Fela left for voluntary exile in Ghana.
1978    Ghanian authorities deported Fela back to Lagos.  On his arrival he married 27 women, his queens, simultaneously.
1978    Fela performs at the Berlin Jazz Festival to a mostly unsympathetic German crowd with misinformed preconceptions of African music. Several of the core band members, including Tony Allen, Oghene Kologbo, and Nico Addey leave the group and remain in Europe rather than return to Nigeria where further harassment from the government awaits them. 1979    Founded his own political party MOP (Movement of the People)
1982    Wife Fehintola gives birth to son Oluseun “Seun” Anikulaop Kuti.
1984    Sentenced in Nigeria for five years on trumped-up currency smuggling charges.
1986    Numerous international musicians, including David Byrne, Brian Eno and Peter Gabriel unite with Amnesty International to apply pressure on Nigerian authorities to release Fela.  He is later released.
1986    Divorces wives, saying: “no man has the right to own a women’s vagina”.
1996    Arrested and released on an alleged drug charge.
1997    Died in Nigeria of complications from AIDS at the age of 59.
(source:  Wikipedia)
Share
Tweet
Pin
Share

2 thoughts on “In Step with Fela! Yeah-yeah!”