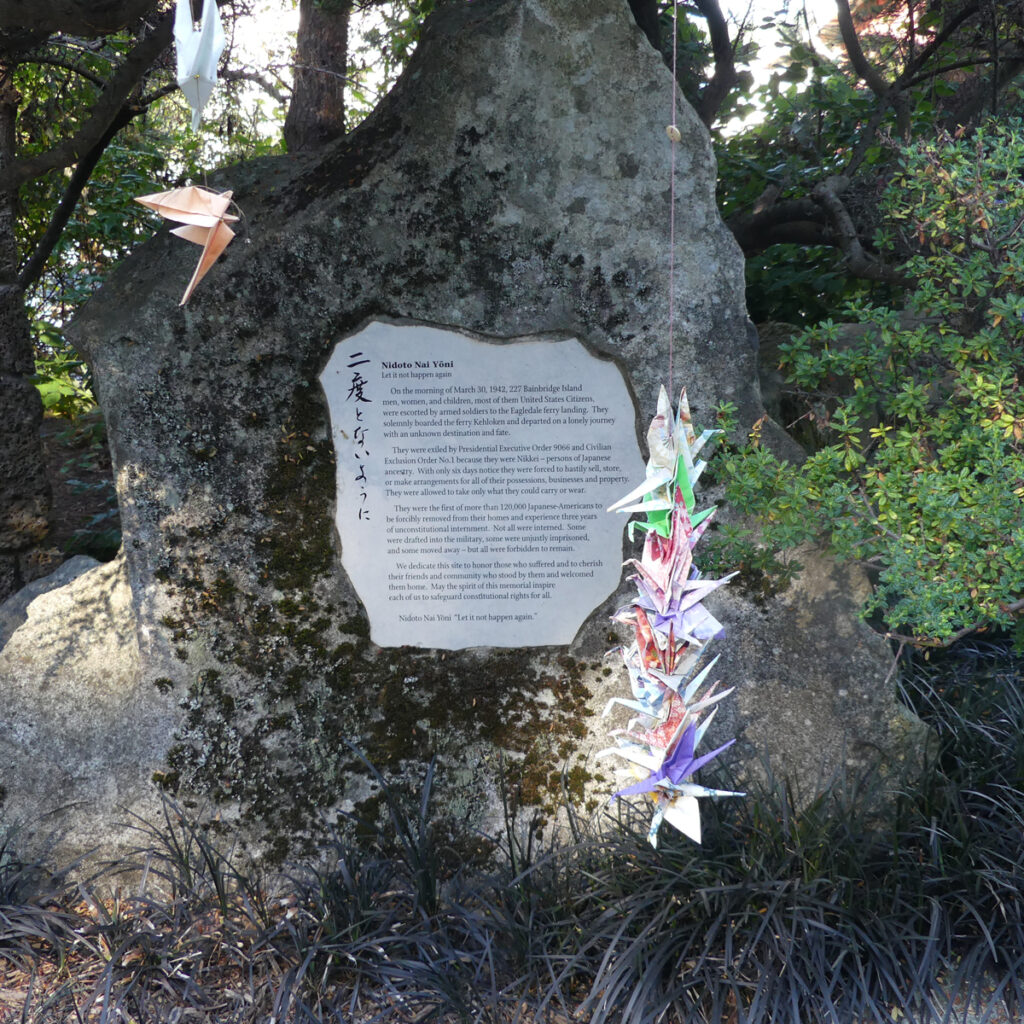 The year 2022 marks the 80th anniversary of an event that happened in WWII. We hear a lot about acts of heroism overseas, but there is one terrible act we hear little about that happened on American soil.

On March 30, 1942, armed soldiers with rifles and bayonets marched 276 men, women, and children of Japanese descent aboard a ship to be sent to exclusion camps. Most of them were American citizens. This didn’t happen in Japan or some foreign country. It happened on Bainbridge Island, Washington.

I recently visited the Japanese American Exclusion Memorial erected in acknowledgment of the internment while on a tour of the island. I met with Lilly Kodoma, who was seven years old when she was one of those Japanese Americans removed from their home under President Franklin D. Roosevelt’s Executive Order 9066 and Civilian Exclusion Order No. 1.

The Memorial includes the Wall, which is the curved cedar and stone section of the Memorial where the names of the people sent to the camps are placed, a granite semi-circle just before the Wall begins, and several sections of placards telling the story in words and pictures as you begin the walk towards the dock where the ferry would have been.

This Memorial is meant to assure this sort of thing could never happen again. The successful completion of it was on March 30, 2009, the 67th anniversary of the internment when the groundbreaking ceremony for the wall was held. When the Japanese American Exclusion Memorial first opened to the public as part of the National Parks System on July 30, 2011, only about 90 survivors remained, with 20 still living on the island.

Lilly met us near the Memorial’s entrance where a placard shows a photo of the people being marched over a wooden bridge to the ferry that would be the first step on their journey to the concentration camps. Most were leaving the only home they had ever known. Many were mothers holding their children’s hands. Soldiers with rifles in hand guarded them.

Lilly began telling of her memories in her soft, gentle voice. “We were the very first community to be excluded under that executive order rather than larger cities like San Francisco and Seattle.”

She said, “Because we were the first, we got a lot of press coverage.” She pointed to a little girl near the middle of the photo. “That’s me holding my little brother’s hand. I was seven. My brother was two; you can see my mother holding my baby sister who was nine months old. My other sister, she’s somewhere to the back; you can’t see her in the picture.”

In the picture, some were tagged with white tags used to mark them as Japanese. It reminded me of the yellow stars Hitler forced the Jews to wear.

We moved to a simple wooden shelter enclosing placards telling how the Japanese first came to Bainbridge Island, the removal, life in the camps, and the return to Bainbridge. She explained that the first Japanese began coming to Bainbridge in the 1880s. They worked in sawmills and in the strawberry fields.

Some were sailors on ships transporting the lumber harvested here. They jumped ship because they saw a chance for a better life. By the 1940s, they were an accepted part of the community. Lilly told us her grandfather came up from San Francisco to meet his bride-to-be. They settled in Seattle. Her mother was born in Seattle in 1907 and claimed to be the first Japanese baby born in Washington state.

Lilly told of the departure. Her mother tried to make it easier for them and told the children they were going for a vacation. They could take little with them, merely a single suitcase. One older couple had a dog but the soldiers refused to allow it on the ferry. Neighbors offered to take care of the dog and they tried, but he missed his owners so badly he would not eat and just stood looking at the road where he saw them last. He died shortly after.

After the war, about 150 people returned to the island. They didn’t face the prejudice some of the returnees faced in other places. One local newspaper, The Bainbridge Review, spoke out against the injustice.

Just before you reach the beginning of the cedar wall, there is a granite semicircular wall standing about eight feet high with protruding stone seats. Posted on the granite, there is an engraved black wood panel with the words “Nidoto Nai Yoni–Let It Not Happen Again.”

The Wall is built of old-growth red cedar, granite, and basalt. It curves to tell of the circuitous journey the exiles suffered. They boarded the ferry here then, were taken to a concentration camp. They later moved many to a different camp before finally allowing them to return home after the war. The 276-foot cedar wall lists the names of all the Japanese and Japanese Americans exiled from Bainbridge Island.

The Japanese Americans didn’t want the wall to resemble a Japanese temple, rather, they wanted something honoring their roots in Bainbridge Island. Johnpaul Jones, a Native American architect, designed a memorial that says “Japanese” and “American.”

The grounds surrounding the Japanese American Exclusion Memorial wall are natural landscaping with native species, including sword fern, mahonia, salal, and shore pine. The wall curves and has an overhanging roof with a Japanese feel. There are hooks where visitors can hang origami or commemorative items.

At the end of the wall at the historic Eagledale Ferry Dock, additional artwork continues to tell the story. There are several rusted steel sculptural pieces by Vaughan, Washington artists Anna Brones and Luc Revel, and a metal gate by artist John Buday. Near the end of the boardwalk leading to where they stepped aboard the ferry are rows of shoes.

Shoes are so appropriate here. When you have walked this path from the entrance at Pritchard Park to the dock at Eagledale, you have literally walked a part of our not-so-pleasant history. Walking it with Lilly Kodoma who lived that history was a treat I will never forget.

You can visit the Japanese American Exclusion Memorial for free. Larger groups can request a ranger-guided tour.