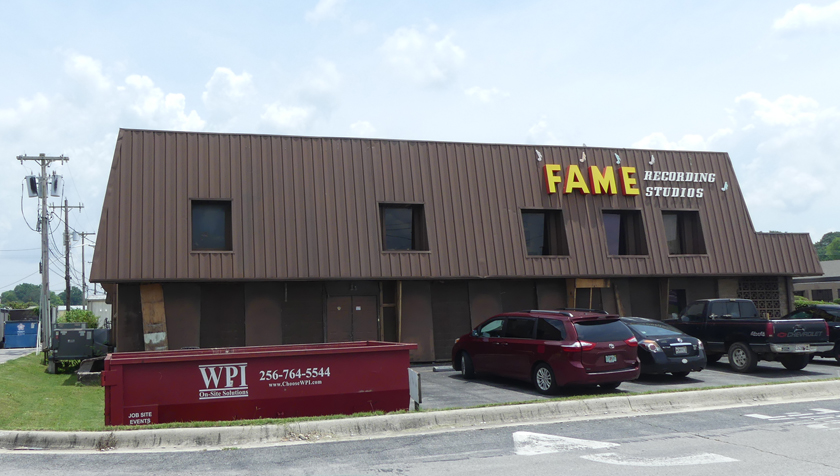 Perhaps no place in America has merged music from artists of all races more than The Shoals area, which consists of Florence, Sheffield, Tuscumbia, and Muscle Shoals, Alabama. The man most responsible for placing Alabama on the music map was Rick Hall, who was mainly a country musician but he loved rhythm and blues.

In partnership with two other musicians, Hall opened a music publishing company in the town of Florence called Florence Alabama Music Enterprises or FAME. The two others soon left the partnership, leaving Hall in sole charge of FAME.

Disregarding Jim Crow laws, he recorded many Black musicians as well as white country singers. Aretha Franklin credited Hall for taking her from a struggling artist to the “Queen of Soul.” FAME recorded other well-known names in R&B such as Percy Sledge, Otis Redding, Clarence Carter, Wilson Pickett, Allman Brothers Band and others. It’s still a working studio today, recording musicians from all over the world, and also offers guided tours to visitors.

The small lobby where you wait to begin your tour is adorned with gold records and record covers of Little Richard, Bobby Gentry, Mac Davis, Wilson Pickett, and Greg Allman. No matter your musical preference, these names resound. When you enter the studio, a placard above the door reads, “Through these doors walk the finest musicians, songwriters, artists, and producers in the world.”

Arthur Alexander earned FAME studio its first hit and the first national hit recorded in Alabama, You Better Move on. It began what came to be known as “The Muscle Shoals Sound.” This was in the 1950s, when the country and especially deep South Alabama was totally segregated. Rick Hall may have been the first person to use the term “colorblind” when referring to himself. He recorded what was then known as “Race Music.”

Percy Sledge’s recording of When a Man Loves a Woman became another biggie for FAME Studio. Atlantic Records signed the record and it became the label’s biggest single. Wilson Pickett recorded Mustang Sally here and other hits. Aretha Franklin recorded I Never Loved a Man the Way I Love you and Do Right Woman, Do Right Man, her first two gold records here.

FAME also recorded country music and one day, Rick Hall allowed a young guitar player who was homeless and staying in a tent in the parking lot, to play back-up for Wilson Pickett. That was a starting point for the young musician, Duane Allman, to form The Allman Brother’s Band and create a new genre known as Southern Rock.

Sam, one of the guides doing the tours, explained that Studio B, added in 1957 as Hall’s business grew, was specifically designed to create a pleasant sound. Sam refers to this as the Rock and Roll Room, whereas the other part of the studio is the Legacy Studio. Burlap sack insulation, wood slats, and slanted walls were all designed to create the right type of sound. He pointed out certain items like a microphone used by Little Richard, a 1970 amplifier, guitars and drums. If a musician is unable to get the right tone with their own instruments, they can use these.

Muscle Shoals Rhythm Section was the main band at FAME. They became known as “The Swampers” and are credited with creating a blend of R&B, soul and country music known as the “Muscle Shoals Sound.” Unusual at the time, they played for Black musicians as well as white ones.

In 1969, The Swampers split from FAME Studio over finance differences and founded a competing studio named Muscle Shoals Sound Studio. The four young men — Barry Beckett (keyboards), Roger Hawkins (drums), Jimmy Johnson (guitar) and David Hood (bass) — rented a building in Sheffield that was built around 1946 and was originally a coffin showroom. The studio was immortalized on the cover of Cher’s 1969 album, “3614 Jackson Highway,” the first album cut here. They closed this studio in 1979, and in 2013, the Muscle Shoals Music Foundation bought it and began turning it into the attraction it is today.

There’s a photo of Cher and all the folks involved in that album, which is a microcosm of Muscle Shoals Sound. It shows the young Swampers, Jerry Wexler from Atlantic Records, backup singers, and of course, Sonny.

Another guide, Terrell, explained, “The roof was tin and when it rained, they were done. They bought burlap and insulation and wrapped it up. Then they discovered the cement block wall — sound would hit that and bounce. David had a friend who worked for Sheffield Utility Company. He had some Styrofoam. They put that on the wall. It worked out pretty well. In nine years in this building, they recorded 312 albums: 75 gold, 14 platinum, and over 110 Top-10 singles.”

“The Swampers” became the nationally known name for the band when Lynyrd Skynyrd, who recorded there, used it in the lyrics of “Sweet Home Alabama.”

They later moved to a newer building. The guide told a little about each of the original Swampers. The studio is furnished with much of the original equipment from back when they recorded names like the Rolling Stones, Willie Nelson, Paul Simon, Art Garfunkel. Bob Seegar, The Osmond Brothers, Rod Steward, Linda Ronstadt, and many other big music names.

One man who had an immense influence on American music, William Christopher Handy, was born in the Shoals. His birth home is now a museum, still owned and operated by his family. Videos tell a lot about his musical heritage. The museum is a small log cabin filled with various possessions of the “Father of the Blues” such as sheet music, his piano and other musical instruments, and photos.

Despite their differences, Rick Hall and The Swampers have come together in the Alabama Music Hall of Fame. It’s a fantastic museum. Naturally, you get a close look at Alabama’s most famous music icon, Hank Williams. There are exhibits you might not immediately connect with Alabama. Nat King Cole from Montgomery was the son of a Baptist preacher, and his statue is sitting at his piano here. There’s an exhibit for Sun Studio here. Yes, that’s in Memphis, Tennessee but Sam Phillips, the owner and man who created Rock and Roll, is from Florence. Lionel Richie’s three gold albums and his gold suit are on display. Jim Nabors shares a case with Irene Jordan, an opera soprano. You can walk through Alabama’s touring bus. The Solid Gold Country Music Car has to be seen to be believed.

If you stay at the Marriott Shoals Hotel and Spa on your visit, the lobby and restaurant, Swampers Bar and Grill, are filled with Swampers memorabilia. They have great music there, too.