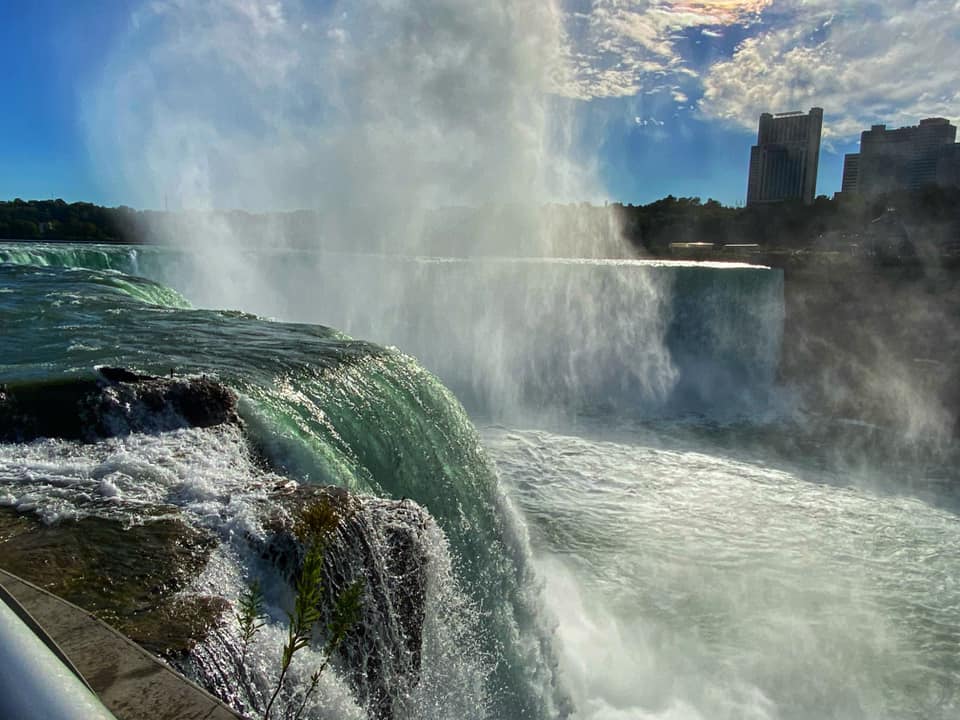 Carefully navigating the boardwalk steps, we inch our way closer and closer to the thunderous waterfall plunging from the rocky wall above. The power of the water blows the mind as we approach the section of the boardwalk aptly named the “Hurricane Deck” of Niagara Falls’ Cave of the Winds attraction.

Attractions like Cave of the Winds and Maid of the Mist—which takes excited tourists by boat into the mist of Horseshoe Falls shared by the USA and Canada—lure over 8 million visitors to Niagara Falls each year. But present-day tourists aren’t the only ones who have ventured to Niagara Falls. Both of these major attractions date back centuries.

The Birth of Tourist Attractions

Formed during the Ice Age when large torrents of water released from melting ice drained into what is now the Niagara River, Native Americans would have been the first to witness the magnitude of Niagara Falls.

During a 1678 expedition, Father Louis Hennepin, a French priest, recognized the size and significance of Niagara Falls and documented his experience in a book “A New Discovery”, which captured the attention of the western world. Before long, curious tourists flocked to the area to behold this natural wonder, especially as the railroad was developed.

In the 1800s, a rock overhang presented a cave-like structure that allowed people to stand under the falls. Initially, daredevils climbed down a rope to stand near the cascading water. Later, a staircase made things a bit easier. In 1925, an elevator added another level of accessibility. The wind created from the plunging waterfall along with the rock overhang led to the attraction’s name: Cave of the Winds.

Today, Cave of the Winds exists on Goat Island within Niagara State Park. A guide leads tourists to the base of the Niagara Gorge. Then intrepid adventure-seekers like Greg and me navigate a series of wooden decks below the Bridal Veil/Luna Falls coming within 25 feet of the Falls.

Another favorite experience, Maid of the Mist dates back to the mid-19th century. Built at a landing near Niagara Falls on the American side of the border, the original Maid of the Mist was christened in 1846 as a border-crossing ferry; its first trip was on September 18, 1846. Soon afterward the completion of the first international bridge connecting the USA and Canada rendered the boat unnecessary. To remain viable, it became a tourist sightseeing boat and on July 14, 1854, Maid of the Mist II was christened.

Tourists weren’t the only ones attracted to Niagara Falls. Industrialists soon followed as they worked to harness the falls’ power using water wheels for mills and factories. In 1895, the world’s first large-scale hydroelectric generating stations opened. Using the direct current (DC) system of the time, the stations could only transmit electricity 100 yards.

Unfortunately, the earlier industries popping up around Niagara Falls brought a downside: commercial and industrial exploitation.

Alarmed by this trend, landscape architect Frederick Law Olmsted—best known for designing New York’s Central Park—led the organization of a group of environmentalists in the late 1800s to protect the natural landscape on the American side of the Falls. Petitioning ultimately led to the 1885 Niagara Appropriations Bill paving the way for America’s first state park – Niagara Falls State Park.

Olmsted designed a special place filled with natural beauty where he declared “the masses could be renewed.” His vision holds strong today for visitors who venture along the peaceful paths winding through native vegetation on Goat Island, where views of the Niagara River add to the scene’s serenity. Another path leads to Three Sisters Island and on to Terrapin Point for stunning views of Horseshoe Falls.

Niagara Falls sees most of its 8 million visitors during the summer months. By timing your visit for the shoulder seasons, early Spring and Fall, you’ll enjoy these natural wonders with far fewer people.

There’s more to see beyond the falls as well. Hiking the Niagara Gorge yields gorgeous views of the Niagara River and surrounding landscapes. Old Niagara Fort delves into military history dating back to the 18th-century. Nearby, Lockport showcases engineering brilliance at the Lockport Locks on the Erie Canal. Focusing on the off-season not only gives you uncrowded access to all of these attractions, but it’s also a responsible way to travel. Isn’t that what we all want for a natural wonder as spectacular as Niagara Falls?