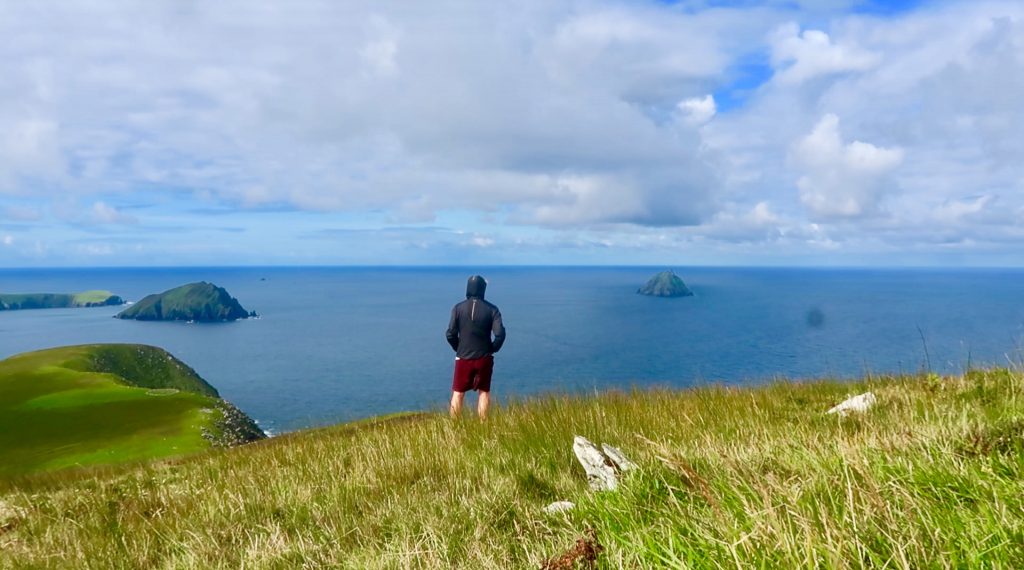 I was frustrated when the Wi-Fi died. My trip to the Great Blasket Island was hinging on the availability of a small boat, and I was now unable to contact the owner. However, after a ten-minute jog to the harbour in Dunquin, I was welcomed on board – the result of a last minute cancellation.

But why was I so obsessed with staying overnight on the Great Blasket Island?

It has no Wi-Fi, warm showers or electricity, but this tiny island off the coast of County Kerry is incredibly important to the history and culture of Ireland. In many ways, this is also a case study and microcosm of emigration from Ireland and why the Irish diaspora is so large in America in particular.

With this in mind, I wanted to stay on the Great Blasket Island and imagine a time that we will never see again. I also hoped to discover what it might have felt like to live on the most westerly landmass in Europe and experience a lifestyle that was immensely different to life on the mainland today.

About Life on the Great Blasket Island

You will find an upper and lower village on the island with a school, post office and community hall in between. While these buildings are now derelict, the rubble stone walls, square-headed sills and enchanting doorways are still visible to this day. What’s more, visitors can walk freely among and within these buildings, while imagining the old ways and traditions on the island.

However, the Great Blasket Island is most famous for the literary heritage left behind by the natives. That is to say, many famous writers and poets came from the island which became known as a birthplace for musical and storytelling genius. In fact, the locals only spoke in Gaelic (Irish language) but these books were translated and now used as part of the modern school curriculum in Ireland.

Aside from the above, there is also a surprising variety of wildlife on the Great Blasket with hares and puffins gracing the hills, and seals, whale sharks and dolphins in the surrounding waters.

Anyway, the point is, this island holds a lot of historical and cultural significance for Ireland. And if that’s not enough, the village offers a unique insight into a way of life that we will never see again.

Abandonment and the Seductive Lure of America

In case you might be asking yourself, the Great Blasket was abandoned in 1954 when the population went into serious decline. More specifically, most of the youth on the island had emigrated to America and those who remained were unable to cope with the harsh demands of life on the island.

For instance, in times of emergency, there were not enough able-bodied people to row to the mainland. Similarly, the prospect of carrying out repairs, digging peat and sourcing food was a little too much for an aging population. But why was the pull of America so strong for the young locals?

Well, America seemed like a very exciting place to live. Most young adults on the island had heard about this land of opportunity and day-dreamed of the riches that might transform their lives. In other words, life on the island was enjoyable but often seemed far less exciting next to the fancy clothing, delightful food and bright lights of New York, Boston and Chicago. In the end, most of these young adults would take the same journey to America and inflict a significant impact on the population, not to mention the future of the island. Interestingly, it was easier for locals to reach New York than Dublin and the boat fare to reach the former was just £8 at the time.

Ironically, I was now obsessed with visiting an island that people my own age were once desperate to escape. And after boarding the boat at Dunquin, I was excited to explore this beautiful landmass.

My Wish to Sleep on the Great Blasket Island

Believe it or not, the home of Peig Sayers (a famous islander/author) is now a small guesthouse and the only operational building on the island. However, visitors are also welcome to bring supplies and camp overnight on the island and while there are no facilities for such guests, this was my choice.

Upon arrival, I walked from one end of the island to the other and stood at the most westerly point of Europe. With gulls and puffins flying overhead and stunning scenery in every direction, I couldn’t help but think that these young islanders had left a natural haven for a smoke and stress filled city.

Later that day, I wandered from one abandoned building to the next and marveled at the small spaces in which large families were able to live together. There was also something about these walls that felt haunting and yet so alive, and it was easy to imagine my ancestors huddled around the fire. I could also hear the laughter and stories and Gaelic tongue, a language that only survives in very small pockets of Ireland to this day. After dark, the seals were singing on a nearby beach and a deafening silence fell in between each chorus.

It really was a very different world and as I settled down in the tent that night, I read “Twenty Years a Growing”, I felt gratitude for this time capsule they call the Great Blasket Island. It was far from the busy streets of the mainland and even further from America but it was as close to a forgotten time in Ireland into which a mere mortal could venture. It’s true, there was no Wi-Fi, no warm showers or no electricity and at that moment, there was nowhere else I wanted to be.