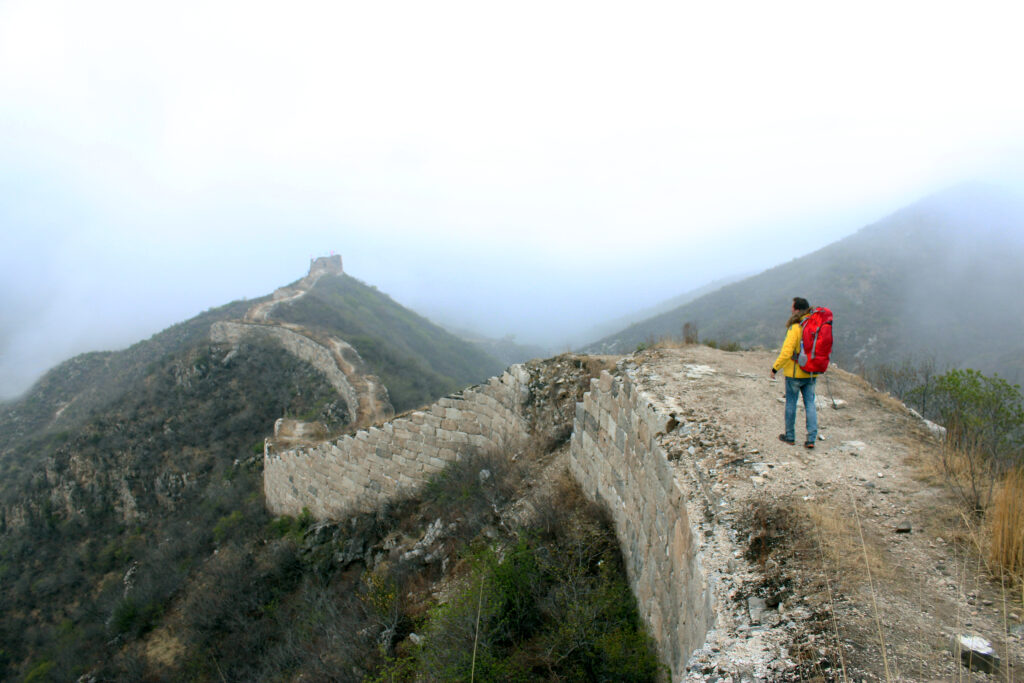 I have already traveled most of Asia, but never really had the chance to see the Great Wall of China. It was the end of May, when I touched down in Beijing after traveling both Japan and Mongolia for 8 days each. Using Beijing as a 3-day layover on the way home to Germany seemed like a good idea in order to finally check-off this historical landmark from my bucket list.

Although it is generally quite easy to get to any of the main tourist spots along the Great Wall of China (there are even guided tours from the airport), that was the opposite of what I wanted. I didn’t want to only see the wall, I wanted to experience it. Feel it. So, I decided to not go the easy route, but the adventurous and hard one.

Following my arrival in Beijing, I made my way to Chenjiapu, a small village in close proximity to the non-restored part of the Great Wall one hours northwest of China‘s capital. After spending the night with a local family, I woke up early and started my hike towards the infamous architectural sight I so desperately wanted to see.

While walking up a steep grassy hill, I sporadically caught a glimpse of what seemed to be the wall. As I got closer, large trees and dense bushes increasingly complicated my journey. Reaching the wall was relatively easy, finding a way up was not. Since this part of the wall was never intended to be used for tourism purposes, it has never been altered or restored in any way. Accordingly, there were no signs or indications telling me where to go. I followed the ramshackled wall alongside its bottom until I finally reached a collapsed part, which I carefully climbed up.

The view that revealed itself was beyond amazing. The majestic wall peacefully rested in the green forests, mysteriously disappearing in the distance. An image that filled me with joy, happiness, and excitement all at once.

Step by step, I followed the invisible footsteps of historical figures once wandering on this ancient architectural creation. After every even stretch, there was a really steep uphill that could only be conquered by climbing large steps, twice or three times the height of regular steps I remembered from my daily life. However, the most tiring climbs leading up to the highest points of the forest always rewarded me with a special treat: stepping into one of over 25,000 watch towers that are distributed along the wall.

Six miles into my hike, white fog started to emerge in between the treetops, making the forest look like an ocean with floating water lilies that didn’t bloom yet. Wind gently started to blow, creating a mesmerizing sound that reminded me of how remotely I was currently traveling.

And then, just when I turned to walk down some more stairs, it happened. Just one second of carelessness was all it took. I leaned forward, stepped on a brick, and put all my bodyweight on it to lift myself down the stairs. Unfortunately, this brick was loose and shifted off the wall. I was barely able to keep my balance and slipped sideways off the wall as well. The fall wasn’t very high, but ended on uneven grounds. All I heard was a cracking sound, followed by an intense pain in my right ankle. The feeling of a thousand needles slamming sideways into my foot kept me on the ground for about 15 minutes before I could even get up on my feet again. Putting weight on the right foot, almost impossible. I somehow managed to get back up the wall but quickly realized that there was no way I would make it back to Chenjiapu. At least not before sundown.

It was about 4 PM and the fog took almost all the daylight away. Given the visibility, the time, and the conditions of my foot/ankle, I knew that there was only one thing I could do: I had to spend the night on the Great Wall of China. After a short rest, I started to make my way down to a level area between two watch towers, where I started setting up the tent that I luckily carried with me. To get some extra protection from the wind, I placed it closely to one of the outside walls. At this point, it was already getting quite dark. Wrapped up comfortably in my sleeping bag, I started to really worry now. Questions like “what if my ankle is even worse tomorrow?” were suddenly flooding my head. One thing I had completely overlooked until then was the fact that I had zero cell phone service, leaving me with no help if I had needed it.

Despite the pain in my right ankle, I fell asleep quite early to nothing but the sound of wind gently touching the outer layer of my tent. Once I woke up, I stepped outside and faced a dense wall of fog, making it almost impossible to see much of the wall ahead of me. It felt mysterious and a bit scary at the same time. I closed my eyes and took a deep breath, inhaling the small aerosols of water floating through the air. This was by far the most solitude I had ever experiences. I noticed that the pain was almost gone and started to carefully pack my belongings to begin my returning journey.

I moved forward and saw the majestic watch towers disappearing in the fog behind me. The wall itself was barely visible at parts, since the combination of overgrowing plants and fog made it look like nature had completely taken over. Moments before descending the collapsed part that I used for my entrance, I took a long and last look at the Great Wall of China, hunching its way through the mysterious Chinese forests I called home for one night. A picture that still has a hold on me today.