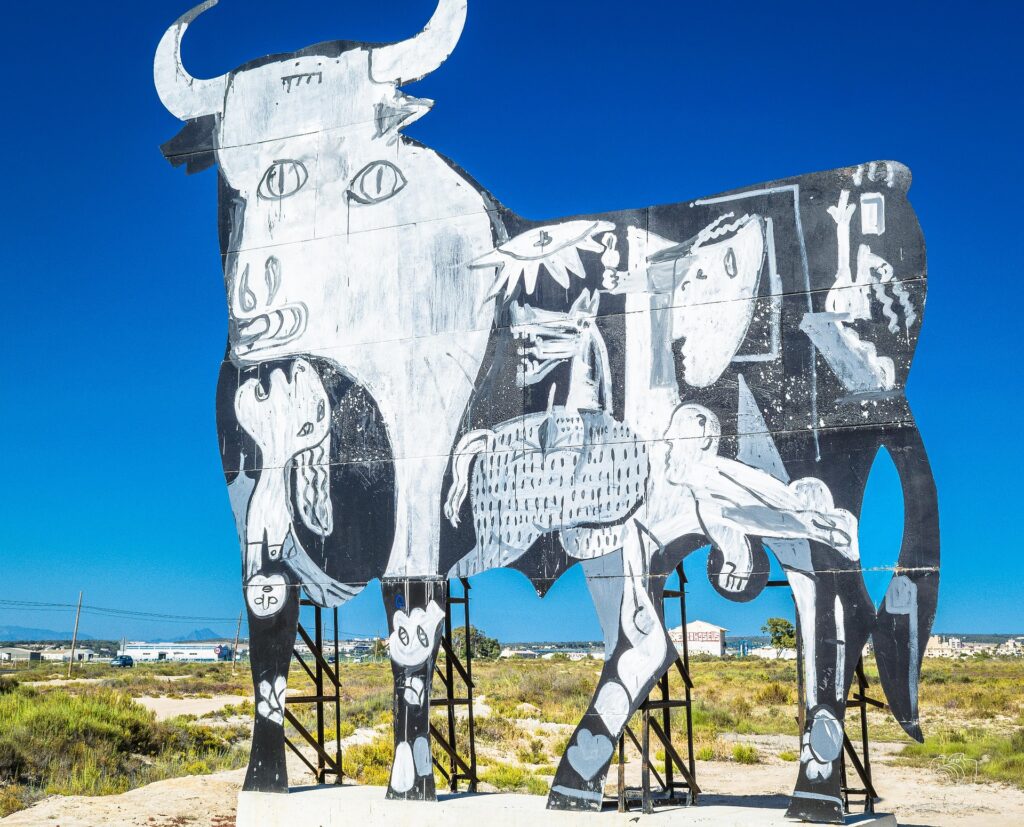 One of the most famous Spanish artists of the 20th century actually completed most of his work while living in Paris. Raised and educated in Spain, Pablo Picasso moved to the French capital in the early 1900s. Here he experienced decades of inspiration as part of the city’s buzzing Modernist art movement and bohemian atmosphere.

Two world wars, a Parisian Nazi occupation that the artist openly opposed, and a bloody civil war in his home country ultimately won by the dictator Franciso Franco meant that Picasso was never able to return to the sunny beaches of his childhood.

Although Picasso could never come home after the loss of Spanish democracy, the artist never forgot Spain.

Born on the sunny Andulisan coast of Spain in the city of Malaga, Picasso always had a love for art. His father taught art at a local school and enjoyed fostering Picasso’s creative tendencies. Today, the sleepy Mediterranean city retains its connection to the artist.

The apartment Picasso was born in is now a foundation tasked with promoting and sharing the artist’s work to current and future generations. Guests can also wander the halls of the Museo Picasso Malaga and gaze upon his sketches and paintings while learning more about his life and childhood.

Although it’s not the most comprehensive selection of his work, this museum is carefully curated. His life in work is shown chronologically, from his formative years and throughout his different periods of work during his prolific career. Temporary exhibits include works of his  contemporaries and modern Spanish and European artists.

Interpreting the Tragedy of Guernica

The right-wing dictator led the Nationalist forces and the opposing side, the Republicans, maintained a stronghold in Northern Spain. Anxious to end the war, Franco enlisted the help of the Axis armies of Nazi Germany and Fascist Italy.

On April 26th, 1937, the town of Guernica (spelled Gernika in Basque) was air bombed to destruction. This allowed Nationalist forces to make their way to the Basque capital of Bilbao. After the unexpected attack, the proud north was close to defeat.

Seen by many as a war crime, the aerial attack killed hundreds of civilians. Since the bombing was on its market day, most of the townspeople were congregated in the bustling town center and were unable to escape. The exact death toll is a debate among historians, who estimate it to be somewhere between 150 to more than 1,400.

Inspired and horrified by the senseless killing, Picasso created his masterpiece, the anti-war piece simply titled Guernica. This is the artist’s most political piece. It is panted in stark black and white and dripping in symbolism. Picasso knew the senseless brutality of war was an issue he couldn’t remain silent on. The artist explained:

“Painting is not made to decorate apartments. It is an instrument of war for attack and defense against the enemy.”

Most men from the area were away fighting on the frontlines, so the majority of the casualties were women and children. In the painting, you can see a grieving mother holding her baby, a terrified horse, and multiple women in terror.

The painting was showcased in Paris and then toured around Europe and America, where it brought international attention to the plight of the Spanish people. Funds were raised during the tour for the war relief.

Picasso maintained ownership over the painting and stipulated in his will that it will not return to Spain until the country is once again a republic. When Franco died two years after Picasso in 1975 and his home country was returned to a democracy, the painting finally made its way back to Spain. Now the emotionally jarring painting calls the Reina Sofia Museum in Madrid its home.

Picasso spent his teen years discovering his first unique artistic point of view in the Catalonian capital of Barcelona. The city was a hive of modernist artists, poets, and intellectuals who inspired Picasso.

Based on the popular art nouveau cafes of France, Els 4 Gats, opened during the turn of the century in Barcelona. It quickly became a meeting spot for devotees of the modernist movement.

The lively bohemian atmosphere and classic food attracted young Picasso. It became one of his favorite restaurants and was where the teenage artist held his first exhibition. A copy of a poster he created for the restaurant can still be seen on the restaurant’s menu.

Barcelona is home to one of the most comprehensive collections of his work, the Museu Picasso. More than 4,000 paintings, engravings, and ceramics show a complete history of his life as an artist.

This is the only museum that was opened during his lifetime. Picasso personally chose the city of Barcelona since its influence was so instrumental in his development as an artist. Picasso donated several paintings to the collection to round it out.

Although he never lived to see his native Spain return to democracy, Picasso remained a Spaniard at heart. The influences of his upbringing can be seen in his masterpieces. Those who love his artwork should travel around Spain and see the locations that inspired him and the beauty created from it.