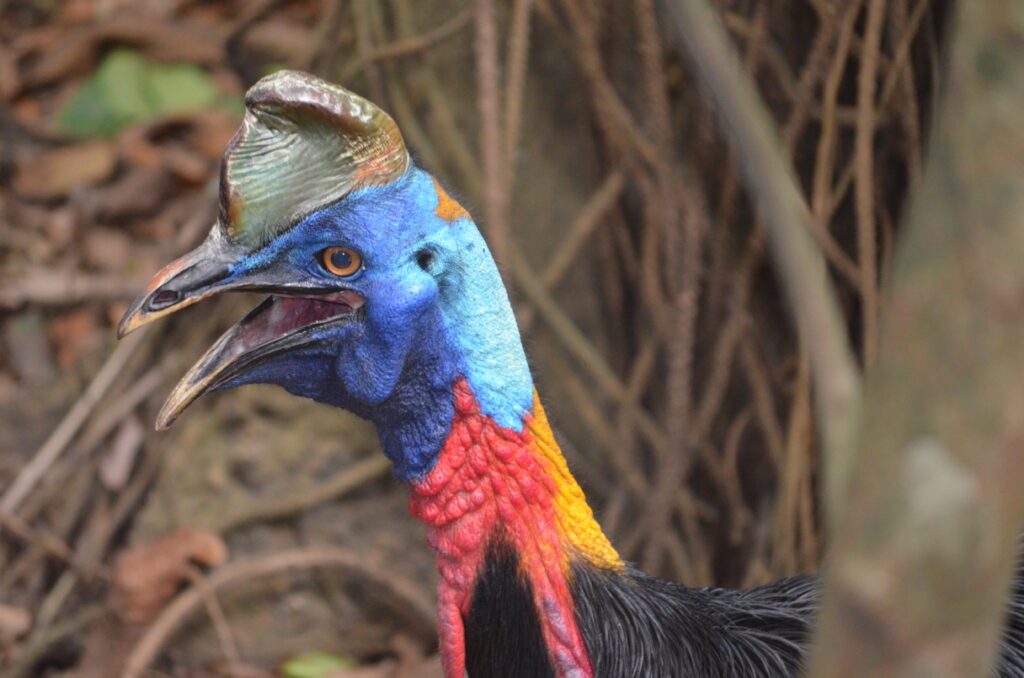 Rare tree-climbing mammals found nowhere else in the world. Brilliantly plummed dancing birds. Bats with the faces of Jack Russell terriers. Sprays of multi-hued orchids and other tropical flowers. Giant emu-like birds known to gut humans like the velociraptors of Jurassic Park lore.

These are some of the shy denizens of Papua New Guinea (PNG), an island nation located north of Australia. Though Papua New Guinea seldom headlines as a tourist destination, it was my intention to espy them all.

To outsiders, New Guinea is most often known as the home of bird of paradise species, whose unique feathers and elaborate mating dances feature in many nature documentaries. But the capital city of Port Moresby has an unfortunate reputation for crime and unrest, and strong travel advisories have restricted many areas of the country for years. Yet, the wild and rare beauty of PNG’s ecology tempt some – myself included – to make the trip.

To get there, we flew from Brisbane, Australia, over pastel coral islands, some whimsically shaped like ducks or sharks – at least to my imagination. As the plane descended, stilted coastal homes came into view, appearing out of a smokey haze.

Because of the rarity and remote habitats of the animals, I didn’t expect to see anything of note outside of the zoos and nature parks. But our hotel, the Holiday Inn Port Moresby, provided my first glimpses of local flora and fauna. Along the road were cascading bougainvillea flowers in red, yellow, white, pink, and purple. Outside the hotel lobby was a fragrant frangipani tree, known as plumeria in the U.S. The courtyard in the center of the complex contained a path winding past trees thick with orchids and staghorn ferns.

Outside the door to my room, a tiny gecko clung to the wall. From the balcony, I could hear the calls of countless unknown birds, as if the illustrations from my vintage Birds of New Guinea field guide had sprung from the pages. I could make out the sunset silhouette of a hornbill in a distant tree.

One of our first excursions was to the award-winning Port Moresby Nature Park in Papua New Guinea, formerly the National Botanical Gardens.

When the bus arrived, my heart caught in my throat. The blue sky was darkened as thousands of winged beasts wheeled from tree to tree. It was one of my bucket-list sightings – the flying fox.

The greater flying fox is one of the world’s largest “megabats,” with a wingspan of 5 feet and a weight of 3.5 pounds. Once inside the gates of the park, I asked our guide if the bats were wild or part of the park itself. “They are not captive,” he said “They simply enjoy our beautiful gardens.”

Though the animals seemed oblivious to our presence, several American tourists were frightened and refused to get off the bus!

Soon, my attention was diverted by a baby-blue turkey-sized pigeon in a nearby aviary. It was the Victoria crowned pigeon, another of the animals on my must-see list. But before I could get a closer look, our guide herded our tour group down a tree-lined path.

He pointed out a small possum in a tree, saying, “That is not one of ours either. He is a visitor.” Below the small mammal was a tangle of tree roots as if several feet of soil had been washed from beneath the narrow trunk. Our guide explained that this was a “walking tree” – a plant that could shift its position slightly by growing new roots on one side while allowing those on the opposite side to die off.

Around another bend of the elevated wooden boardwalk was a tree with narrow slabs of root along its lower trunk. Our guide called it a drum fig and demonstrated the loud, drumlike sound that striking the slabs produced. Children, he said, were taught to find this type of tree and drum on it if they ever became lost in the forest, so that their families could follow the sound and find them.

Next, we saw rare tree kangaroos munching fruit, and a “living dinosaur” – the cassowary, a helmeted 6-foot-tall bird with 4-inch velociraptor-like talons. Finally, we made it to the aviary, where neon-colored fruit-doves and orange birds of paradise hid in the canopy above.

In addition to its intriguing animals, the park is also home to cultural displays such as a yam house and a war canoe. As our morning drew to a close, we were greeted by a throng of dancers in traditional grass skirts and feathered headgear. Their dance told the story of an egret hunting for fish. A number of the dancers beckoned onlookers to join them, and I was soon bedecked in skirts and feathers as well. To be so fully immersed in a lovely and unfamiliar culture – even for just a moment – is an experience I will never forget.

Our next excursion was to the Port Moresby Adventure Park, Papua New Guinea. At the entrance, a green and yellow Ferris wheel towered over painted concrete statues of giraffes, elephants, zebras, and rhinos.

In the aviary, I was able to meet a hornbill like the one I had seen on my first evening in Port Moresby, Papua New Guinea, his huge hollow bill and orange head contrasting with his jet-black feathers. Blue-eyed brown sicklebills and black parotias with long feathers trailing from their heads fed on hanging berry boughs, tossing the fruits with their beaks, and Raggiana birds of paradise – the symbol of PNG – danced and called to one another.

In the nearby National Orchid Garden, I gazed at hundreds of blooming epiphytes, some similar to and others radically different from the Phalaenopsis moth orchid that lived on my windowsill back home.

Perhaps the most memorable of the day’s events was the crocodile show. The handler, Farapo Sare, lured a massive, lumbering saltwater crocodile – nearly 20 ft in length – into the shallow end of its enclosure, cooing softly to it. He then proceeded to sit on the animal’s back and kiss it on the snout before rewarding it with food.

A staff member told us that Sare has worked with the same animals for over 30 years and that they have a deep trust in and respect for one another. Farapo is both deaf and mute and thus has difficulty expressing himself to other people. But the crocodiles seem to understand and respond to his unspoken demands.

The world-famous crocodile feedings at Australia Zoo, which we would experience the following week, were no rival to the Crocodile Man of PNG.

On to Even More Adventures

That evening, we relaxed in the hotel pool, the moon bright overhead, contemplating the people we had met, our glimpses into a rainforest world we’d only dreamed of knowing, and the further wonders we would encounter upon our return to Australia. Flying foxes winged across the moon and disappeared again into the darkness, a fitting farewell to our extraordinary wildlife adventures.