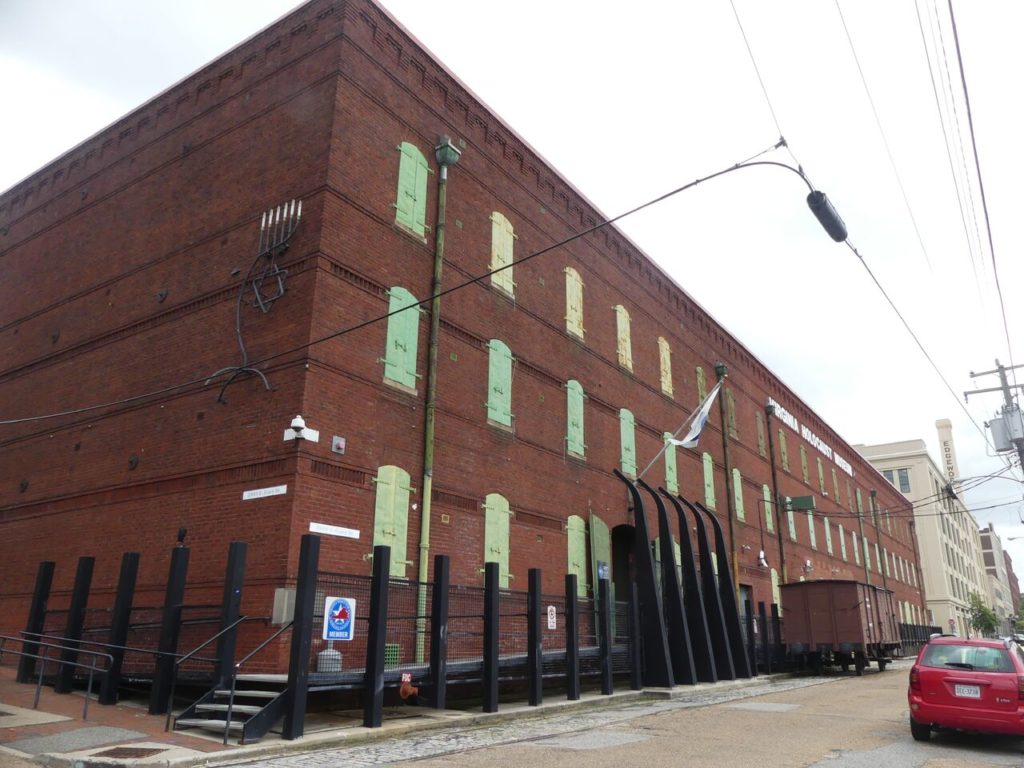 Some things should never be forgotten. The Holocaust is one of them. In the middle of the last century, Nazi Germany, along with its allies, systematically killed about six million Jews as well as many others, including the Romani people (known as gypsies) and gays, for the purpose of ethnic cleansing. The Holocaust Museum in Richmond, Virginia is a dramatic retelling of the events that occurred, focusing heavily on the experiences of the city’s Holocaust survivors.

The museum is housed in an 1899 former American Tobacco warehouse that conveys a sense of ominousness even before you even step inside. The four-story, block-long building could be hiding any type of horror within its red brick walls. It sits directly across from the city’s railroad tracks and there is a closed cattle car positioned against its sturdy black-wire fenced dock. No prisoner could escape through its windows, which are sealed with sturdy wooden shutters.

Step inside and you are between rails taken from a spur line leading to the Treblinka Death Camp. Cobblestones from the Warsaw Ghetto line the sidewall of the entrance. Signs everywhere inform visitors of the horrific events that occurred.

The museum exhibits are arranged in chronological order so that you are led deeper into the story of the Holocaust as you progress. As you walk from room to room in the museum, each room is dark and only becomes lighted after you enter, adding to the feeling of horror.

One room, representing the barracks in a concentration camp, is filled with life-like figures packed tightly into bunks. The bunks are four tiers high from floor to ceiling with three men lying vertically on each bunk. They look like real people at first glance.

Life-sized posters along the walls explain the purpose and history of the camps. One portrays life in Dachau, the first concentration camp, which opened in March of 1933. Another explains that the camps were originally makeshift prisons designed to imprison “unwanted members of society.”

One room contains videos featuring Richmond area survivors of the Holocaust and old news clips telling what they and their family endured.

The museum highlights many little-known events related to the Holocaust. For example, in the early 20th Century, many countries, including the U.S., limited the immigration of Jews. But as Jews in Germany saw Hitler’s growing persecution of them, some tried to find ways to facilitate emigration. Dr. Curt Bondy, a German psychologist and educator, believed that by training Jewish youths in agricultural skills they would have a better chance of emigrating. He established a farming center in Gross-Breesen for Jewish youths for that purpose. Two hundred Jews took part. Dr. Bondy had two cousins in the Richmond area, Morton and William Thalhimer. They purchased a 1,600-acre farm in Burkeville, Virginia named Hyde Farmlands and helped 30 Jews relocate from Dr. Bondy’s farm to southwest Virginia. In all, about 150 young men from Gross-Breesen immigrated; the Nazis killed most of the remaining young men.

The Story of the St. Louis

The strong anti-immigration laws in countries including the United States are the subject of another museum exhibit, which features the story of the St. Louis, a German ship that sailed from Hamburg on May 13, 1939, with Jewish refugees. It was heading to Cuba, which admitted only 28 of the passengers. The rest were refused entry.

The St Louis then tried to dock in Miami. Some passengers sent a telegram to President Roosevelt begging for help. Roosevelt, who was hoping for a third term and feared anti-Semitic public opinion, did not answer. The State Department issued a statement saying that the remaining 900 passengers must, “await their turns on the waiting list and qualify for and obtain immigration visas before they may be admissible into the United States.”

This process took years and, as hindsight now shows us, these people did not have years. They returned to Europe but not to Germany. Instead, they took refuge in various English and European countries. Of the 532 who settled in France, Belgium and Holland, almost half, 254, died in the Holocaust. The exhibit has photos of the passengers and their stories.

The image of the ghettos is vividly portrayed in the museum with posters and three-dimensional exhibits. Kovno Ghetto brings to life the location of the largest Jewish massacre in Lithuania. The 27,000 ghetto residents were assembled in Democratic Square on October 28, 1941, and divided based on occupations. The 9,200 deemed not needed to do forced labor, were marched to a former prison called Ninth Fort and on the following day were made to strip off their clothes and were shot and thrown into pre-dug pits. Almost half of those murdered Jews were children.

One family, the Ipsons, managed to escape the Kovno Ghetto and travel 53 miles to a farm owned by the Paskovskis in the Lithuanian countryside. The Paskovskises were a poor Polish-Catholic family with only an earthen floored one-room home and small barn but they shared their meager dwelling with the Ipsons for three weeks until they could dig an underground bunker under the potato field for the Ipsons and some other refugees to hide out. The tiny bunker was nicknamed “The Potato Hole.”

Jay Ipson, who was about nine years old then, is the co-founder and former executive director of the Virginia Holocaust Museum. This exhibit, telling his family’s story and that of courageous non-Jews who risked their lives to help the Jews, is so detailed you can visualize the fear the refugees and their rescuers felt when German tanks passed near to their hiding place.

The train was the Nazis favored method of transporting Jews. One exhibit forces you to follow railroad tracks to a cattle car used to transport Jews to concentration camps. Another exhibit shows the extermination camps the trains brought people to and the numbers of people killed at each. On one wall are clips from Charlotte Delbo’s book, Arrivals, Departures. “Five by five they walk down the street of arrivals. It is actually the street of departures but no one knows it. This is a one-way street.”

The most heart-rending exhibit is that of the crematory. The crematory contained undressing rooms and a gas chamber but it is the incinerator ovens that demand your attention. This was where Nazis tried to destroy evidence of their crimes. As soon as the people were gassed, they were fed into the flaming ovens after having gold teeth pried out of their mouths. The eerie red glow is so realistic you expect to feel heat and smell bodies burning.

A Museum Designed for Learning

The museum, which is free, is brimming with exhibits, photo walls and oral histories, including a full-sized replica of the Nuremberg Trial courtroom where Nazi war criminals were prosecuted. This is not a fun museum but it’s a museum we all should visit. The museum was founded so everyone can see what hate can accomplish and so that knowledge and understanding may prevent the reoccurrence of another holocaust.