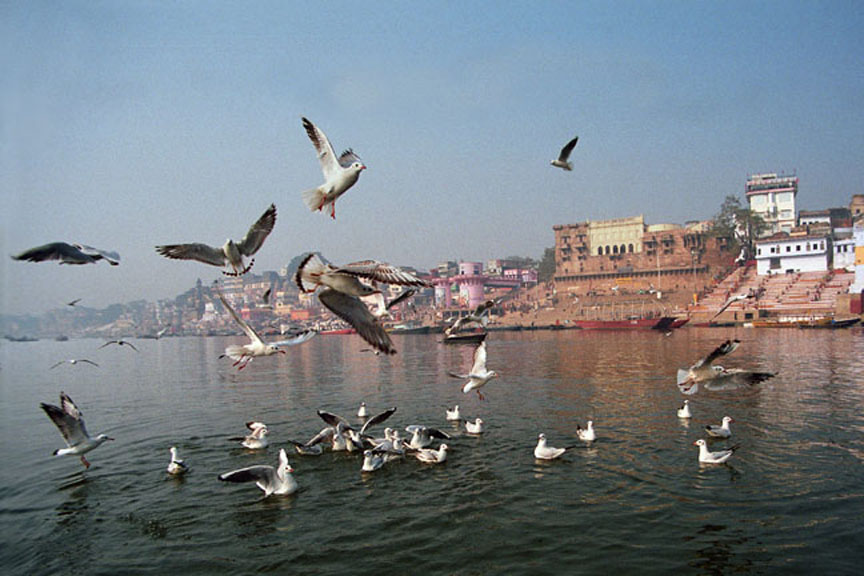 It was my first trip to Varanasi and I was a little disappointed. The squalor, the impossible traffic jams, and the pollution added up to dispel my romantic notions about the city that Mark Twain had famously said to be ‘older than history, older than tradition, and even older than legend’. Even the spectacular Ganga Aarti on the Dasaswamedh Ghat in the evening did not overwhelm or delight. A visual extravaganza with five young priests in elegant robes making an elaborate offering to the holy river from decorated platforms — it looked and felt much too touristy.

“Set yourself up near the ghats,” said Nandu, juggling three glasses of thandai — an eclectic mix of milk, clarified butter, and an assortment of spices. The syrupy glass of liquid was a saving grace for my Varanasi adventure so far. His small shop near the busy Godawlia crossing in the old part of the city was always brimming with people. Nandu handed me a chilled serving of thandai and a grimy piece of paper with an address of a riverside hotel scribbled on it. As I left his shop, he called after me: “And set out for the ghats early in the morning. Very early. I will fix a boatman for you.”

I followed Nandu’s directions and landed myself in a guesthouse very near to the river. Non-descript with large, bare rooms and tucked away deep inside in the warren of alleys near the main ghats, it was delightfully cut off from the cacophony of the main thoroughfare leading to the river.

The next morning, I woke up at 4 a.m. and walked out into the cold December night, watching with a slight trepidation the huge silhouettes of Varanasi’s bulls lazing across the narrow streets. I warily walked past them.

Just around the corner, I ran into a motley group of North Indian villagers — men in white dhotis and women in colourful sarees and gold bangles. Chanting incantations in a singsong melody accompanied by the tinkling notes of cymbals, they half-walked, half-danced through the alleyway. I followed them, soaking in the rhythm. In a few minutes, I was out on the main road that ran past the yellow streetlamps towards an inky oblivion to the east. That way would be the Ganga.

It was a quarter past four. A tea seller had already opened shop. A brief pause over a leisurely glass of malai chai — thick, sugary tea spiced up with cardamom — before I headed towards the proverbial ghats of Varanasi.

Even in those pre-dawn hours, the main ghats had come alive. A barber arranged his kit on the stairs and got busy with his first client of the day. A few steps above him, in a darker zone, a sadhu was sharing both his spiritual knowledge and ganja pipe with his select group of disciples. A group of elderly widows was preparing for their early morning dip in the holy waters — a ritual that they believe will lead them to moksha (salvation), which would mean an ultimate liberation from the cycle of life and death. Country boats were moored in the waters, neatly arranged in groups forming photogenic patterns amidst the whiff of an early morning mist. On the stony outcrop of Munshi Ghat, roundly jutting into the river, a pot-bellied man, clad briefly in a loincloth, was fiercely making acrobatic movements, his oiled up limbs glistening in the faint morning light that had started to illuminate the ghats and the river. Just below him, where the flight of stairs had met the river, a young lady, draped in a red saree, offered some flowers and a lighted camphor lamp to Mother Ganga. I began to realize that I have arrived at quite an unpredictable part of the world.

Kashinath, the boatman Nandu had fixed for me, arrived with his country boat at six just when a crimson-coloured sun rose above the eastern flanks of the Ganga. The elderly boatman deftly manoeuvred his oars through the dense maze of boats of Dasaswamedh Ghat, and soon we were in the middle of the river — the assorted sounds of the ghats now a muffled buzz. As we slowly cruised along the river past the line of ghats on our left, the perspective shifted, panning out to the focal length of a wide-angle lens. The ghats were much more crowded now and the activities seemed to be more frenzied, almost overlapping — the washermen, the devotees, the sadhus, and tourists — all melting together into a technicoloured kaleidoscope.

We approached Manikarnika Ghat, the major burning ghat of Varanasi and every tourist’s vision of eternal India. The ancient stone pillars of the ghat, blackened by centuries of fumes of the burning pyres, were half-hidden by the wintry mist and bellows of bluish-grey smoke volleying from the four pyres. A few men moved in and out of the dense smoke. A dark-coloured ox with a huge hump sat in the middle of it all, listlessly watching the goings-on around him. Three corpses, garlanded and wrapped in white, lay on the stairs of the ghats, waiting for their turns to be cremated.

Suddenly the mist slowly lifted and the river was bathed in a soft, mellow light. The burning pyres, the country boats overloaded with perfumed wood, and the distant din of the Sanskrit chantings coming from Manikarnika were almost surreal in that beautiful light. And then I saw them. Hardly twenty yards away from the last burning pyre, a young couple had come to the river with their newborn child to offer puja and seek blessings from the river. It was a moment of candid juxtaposition of life and death. And a lingering moment of truth that I knew would stay with me.