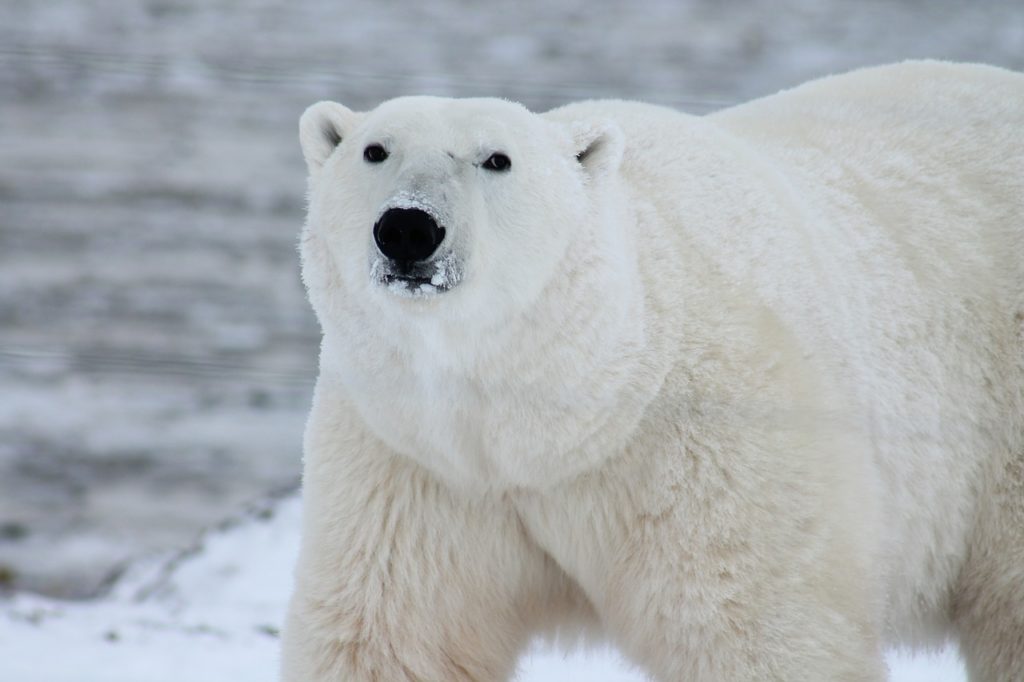 One of the North’s most recognized species, the polar bear (Ursus maritimus being its Latin Name) has a notorious reputation as a bold and brainy predator, not to mention its massive size. Arguably known as the largest predatory land species, with the Alaskan Kodiak brown bear being another contender, the Polar Bear is one of the only animals on the planet that stalks and hunts humans for prey as well as other animals. This makes them one of the most dangerous animals that can be seen worldwide today.

Today there are around 20-25 000 polar bears spread throughout northern nations, with a total of 19 different populations. Populations of polar bears are mostly found within the Arctic Circle, although they can be seen as far south as Newfoundland. Although born on land, these fierce predators spend most of their life on polar ice, hunting their maritime prey. The bear’s main sources of food include seals, walrus, whales, birds, and kelp. As you’ve probably seen on a variety of nature documentaries, polar bears are ingenious with their hunting techniques, waiting at seal’s breathing holes in the ice, then pouncing on their prey. In order to stay warm in the frigid arctic air, the bear’s have a thick, insulating four-inch layer of fat, topped by two layers of fur. All this insulation not only allows them to hunt all winter long in the cool northern temperatures but also swim in the freezing Arctic Ocean. Male bears can reach enormous size, weighing up to 1322 lbs (600 kg), with females close behind, weighing up to 660 lbs (300kg); both can live up to 30 years.

Polar bears are closely interconnected with the fight against climate change, as their main habitat, the polar ice cap, is rapidly melting due to rising temperatures. As they hear about the their struggle against climate change, many travelers are becoming extremely motivated to see them now, just in case the species goes extinct due to a lack of habitat. The countries in which polar bears live(Canada, USA, Kingdom of Denmark(Greenland), Norway and Russia) have banded together and signed the Circumpolar Action Plan, which is a 10-year strategy to secure the survival of the polar bear population. Although in some locations populations are declining, in others such as Davis Bay, the population has increased since the early 2000’s. According to scientists, however, although the number of polar bears worldwide may be stable, the condition of their bodies is not, with skinnier bears more common than in earlier studies. Many populations in Western Canada and Alaska that have experienced extreme ice loss have successfully adapted to a more land based living style, although this has led to more dangerous and sometimes deadly instances of human contact. Overall, the status of polar bears and their relation to climate change is controversial at best, although it can almost certainly be agreed that polar bears and their habitat are endangered by the many side effects of climate change, how the species will adapt to these changes is yet to be seen.

Many travelers are eager to see polar bears, especially after learning about declining world populations and loss of habitat. They are afraid that if they don’t see them immediately, they never will. This could be true, so if you are interested in this arctic predator, it might be best to book an excursion as soon as possible. There are several places to view them in the wild in Canada, including Churchill in Manitoba, and Baffin and Cornwallis Island in Nunavut.

Churchill, Manitoba is known as the “Polar Bear Capital of the World”. In the fall, many bears can be seen here, due to its location on their migratory path from inland Canada towards Hudson’s Bay and its icefields. From October to early November tourists flock here to see the bears, as there is almost a virtual guarantee of experiencing one of these magnificent creatures in the wild during this time period. Tours usually consist of either driving around in a “tundra buggy” or boating and spotting not only polar bears but other interesting wildlife such as the endangered Arctic Fox and the Beluga Whale. Expeditions can range anywhere from just day trips, to week long excursions. Notable companies include Frontiers North Adventures, Great White Bear Tours, and Sea North Tours.

There are also multiple places to spot polar bears in Canada’s territory of Nunavut. Two of the best locations to gain excellent views of these magnificent creatures are Baffin Island and Cornwallis Island. Baffin Island is the largest island in Canada and is inhabited by the Inuit. Tours here not only offer the chance to see polar bears but also Narwhals and many different bird species. Check out: The Arctic Kingdom and Eagle Eye Tours. Cornwallis island is quite isolated and also inhabited by the Inuit. To see them here, you have to visit Resolute, a small village on the island, and known to be one of the coldest inhabited places in the world. There are not many tours here, with most tourists being on expedition boats venturing throughout Nunavut. If you are interested in this idea, check out Adventure Canada.

Overall, enjoy the marvels of Canada’s north on your visit to experience the habitat and lives of polar bears, whether it be in Churchill or Nunavut. Hopefully, the experience will be enlightening about both the species as a whole, the environment and the danger of climate change. Safe travels, and enjoy your expedition, whether it just be for a day, or for a full week!