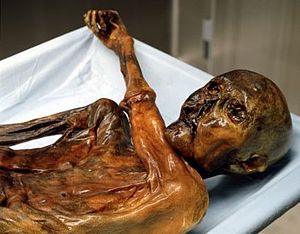 On September 19, 1991, two German tourists were hiking through the Otzal Alps on the border between Austria and Italy. In a receding glacier, the couple spotted the body of a man, now known as – Otzi, The Iceman (named after Otzal Alps). They contacted authorities who assumed the corpse to be of recent origin. Onlookers touched the body and in some instances actually removed pieces of clothing, contaminating the find. In a morgue in Innsbruck the true nature of the discovery was learned.

Current estimates are that “Otzi”- The Iceman was approximately 45 years of age at his death more than 5,000 years ago and stood approximately 5 foot 5 inches tall. His body had approximately 60 tatoos. His clothing was well made of woven grass and shoes of leather. He had with him a copper axe, a flint knife a bow and arrow. The cause of death of The Iceman is uncertain, but an x-ray revealed an arrowhead in one of his shoulders. He had been shot through the back with an arrow but the glacier’s ice preserved his corpse. It also appeared he had been struck on the head. Also captured in the ice around his shriveled body was a collection of neolithic plants and fungi. The body is now on display at the South Tyrol Museum of Archaeology in Bolzano, Italy.