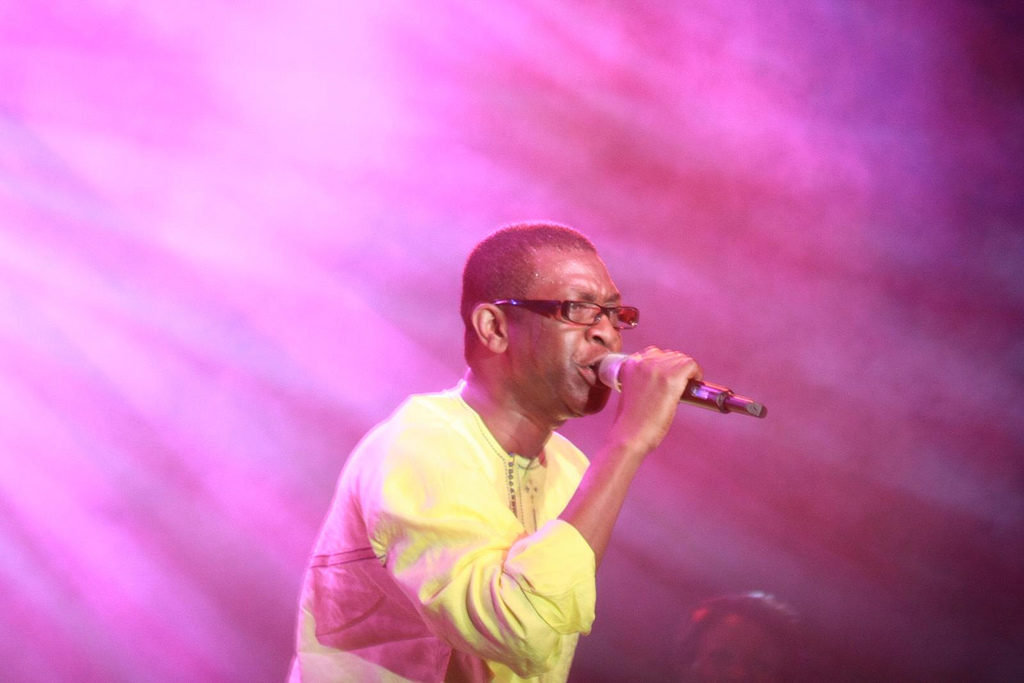 It’s no secret. Music has always been a passionate harbinger of change and social activism. From Woody Guthrie’s “This machine kills fascists” message emblazoned on his beat-up acoustic guitar, to Bob Dylan’s stunning political messages perhaps most unequivocally stated in his timeless anthem “The Times They Are A Changin’”, to the Woodstock era’s desperate and eloquent pleas for peace during the Vietnam war, even up to Bruce Springsteen leading the charge on a couple of Vote For Change tours here in the 21st century, the musical community has forever used it’s bully pulpit to sing loud the possibilities of making the world a better place, or at least reminding us of what’s wrong and offering some ways to fix it via song. But perhaps no single musician has had a bigger influence on a bigger audience than the brilliant Senegalese musician/percussionist/activist Youssou N’Dour.

Lauded by Rolling Stone in 2004 as perhaps “the most famous singer alive” because of his ability to reach out and touch more actual human beings than anyone else given the massive African audience that has embraced him so fully, N’Dour has fostered change and awareness for such social issues as women’s rights, the fight against malaria, reducing African debt, and urban youth activism. He believes that he has the responsibility to foster at least awareness, if not actual change. “Music is something uniquely used to fight against a lot of problems. I realize the power of music and I use my music to do a lot of promotion of things I like, and we’ve learned that something good can come out of it.” Then it is no surprise that N’Dour’s most recent passion is to join musical forces with one of his idols, the late Bob Marley, another impassioned musician who wrote powerful political songs amidst social unrest in his own underdeveloped home country much like N’Dour has. The stunning result is the striking new CD Dakar-Kingston, a collection of Marley’s and other popular reggae tunes infused with N’Dour’s unique African rhythms and styles.

N’Dour hails from Dakar in Senegal, and Marley called Kingston, Jamaica home, thus the thread symbolized by the album’s title. N’Dour feels it’s a proper tribute to a man he feels a very special kinship with. “When I was young my uncle was working in a store where they sell music, a lot of music,” N’Dour told me by phone from Dakar recently. “And every weekend he would bring home a lot of Bob Marley. I was really touched since it was coming from another underdeveloped country. Bob Marley is my hero, not because of the music only, but also because of what he symbolized. I’ve been a big fan of reggae music since long time ago, I’ve always wanted to think about the roots of reggae, how this music touches us, I’ve always found something very interesting about the roots, it’s like when the slaves left [Africa]. When I see all the same thing happening when I was in Kingston, I’m sure now there’s a connection between this music and Africa. I have the freedom to do what things I like so I was thinking about doing the reggae music.”

The feel of Dakar-Kingston is a unique blend of the familiar strains of reggae music and N’Dour’s native Senegalese sound, which meld together beautifully and bring the listener to a place that wonderfully combines the two genres into something recognizable yet different. “Whenever I’m doing something new, I make sure that my style and my music are on the inside a lot. I was thinking about the guitar and the percussion of reggae as I was planning to do this album, it’s something really interesting. And when you listen to the album, you hear the percussion with the guitar as well as my sound and it’s something really unique. I call it not just reggae music, but Youssou and reggae music.” As for his passionate never-ending social activism efforts, N’Dour’s latest focus is on important elections in his native country. It’s clear this world-renowned artist and activist is not slowing down, in fact, he’s moving faster than ever on his humanitarian path.

“Now my real vision is to make sure….we have a lot of elections in Africa, so I want to make sure people have their [voting] card and be ready to vote for their party, make sure a lot of people participate in the next election in Senegal. I am really positive, I see people trying to get the power. There is something really positive about today, people working to be heard and getting the power to make change.” From the beginning, N’Dour hasn’t been premeditated in his activism. But when he sees how he can make a difference, he answers the call whenever he’s needed. “I don’t have a plan, but I can use my music to do a lot of social things. Every day I meet people, and if I see situations, I act.”

Stephen Houk is the publisher of Midlife Rocker and the lead vocalist in the Second Wind band.  During the day you’ll find Stephen at WUSA 9, the CBS Affiliate station in Washington, DC.  In the evening you’ll find him “enjoying life and rocking out!”