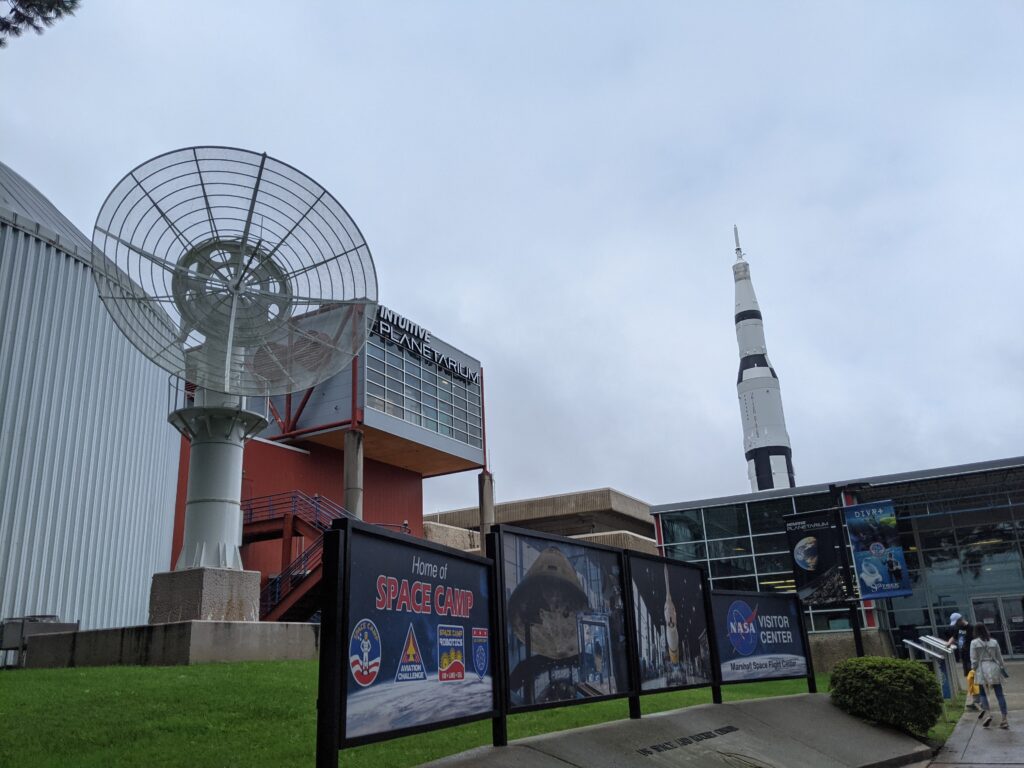 When I was a kid, one family trip inspired my imagination like no other ever had. Recently, I went back to the US Space & Rocket Center in Huntsville, Alabama, hoping to experience some of that childhood excitement once again. What I found was a museum in disrepair – but with a few redeeming moments of wonder.

I can vividly recall my “astronaut phase.” I was eight or nine years old. My favorite movies were Apollo 13 and Armageddon. I was fascinated by the stories of Sally Ride and Christa McAuliffe. I wrote stories about going to Space Camp and building rockets with swingset propulsion (hey, I didn’t understand physics yet!).

My parents, eager to encourage my interest in science, planned a visit to the US Space & Rocket Center. As we had done several times before, we stopped at the rest stop on I-65 just south of the Tennessee-Alabama border, to see the 224 ft tall Saturn 1B rocket displayed there. And our day was just beginning.

As we toured the museum itself, I gazed around in wonder. From space race-era toys to actual moonrocks, the future I craved was right before my eyes – and under an inch of glass. We toured a garden full of immense rockets, landing craft, and space shuttles. I ate Dippin’ Dots (a.k.a. astronaut food) as I watched my dad take a dizzying spin on a G-force simulator. We took a bus tour to the Redstone Arsenal’s Marshall Space Flight Center, where real scientists were putting together space-bound vehicles, wearing white Tyvex suits in a sterile “clean room.”

But it was walking through the recreation of the International Space Station that stopped me in my tracks. There were kids – fellow kids! – visible through the windows, practicing spacewalk “missions” in an underwater world.

This was Space Camp. It was where kids learned how to be astronauts. They slept in space-station-style bunks, rode G-force simulators, and wore official-looking blue coveralls with patches on the arms. Suddenly, Space Camp was for me a source of gut-wrenching longing.

I went home with spaceflight aspirations and a toy space shuttle Discovery in hand. But I didn’t go to Space Camp – not that summer nor those to follow.

But the longing didn’t go away. Twenty years later, the mere thought of Space Camp or space flight was still enough to cause an internal flutter.

So I decided to go back.

Returning to the US Space & Rocket Center

When my husband and I planned a trip to Huntsville, the US Space & Rocket Center was a given. He had never been there, and I was dying to feel the pleasant tug of the universe at large once more.

In fact, I was delighted to learn that the Space Camp program had been expanded to adults via the Adult Space Academy – “an adventurous, weekend experience allowing campers to assume roles in hands-on, interactive space missions and learn what it takes to be an astronaut.” There were also shorter single-day experiences, such as the Underwater Astronaut Training, which uses scuba and virtual reality headsets to simulate a spacewalk.

Our museum visit began just as I remembered – a nostalgic look at Star Trek, Star Wars, and Jetsons memorabilia from the time when the world as a whole turned its eyes to the stars – seeing them for the first time as a place we could actually go.

But as we continued our tour, disappointment began eating away at my ebullient enthusiasm. Some of the exhibit halls were closed. Buttons and knobs on interactive exhibits were broken, paint worn away by decades of youthful hands. The museum suddenly felt much smaller than I remembered.

Walking through the Rocket Garden, my stomach tied in knots – but not in the hopeful, longing way it had before. Much of the metal equipment was tinged with rust. The informational markers were largely unreadable, the protective plastic baked and cracked and discolored by years in the sun. The iconic space shuttle had been removed for restoration. The G-force simulator, which I had been too small to ride on my childhood visit, was closed, along with all the other outdoor interactives and refreshments vendors.

Bereft of activity, the area felt as barren as the moon.

Sparks of Wonder at US Space & Rocket Center

Houston, we may have noted some problems, but our trip to the US Space & Rocket Center was not a total bust – far from it.

The most enlightening experience of the day was the “Our Place in Space” guided solar system tour in the Intuitive Planetarium. This separately ticketed daily event is well worth the investment. We excitedly sat with our popcorn in hand – it was, after all, our first visit to a movie theater since the pandemic had begun.

An enthusiastic guide took us on a virtual tour of the solar system in an IMAX-style theater that pushed my peripheral vision to its limits.

We flew past each planet in our solar system and explored some of the more interesting moons. Then, we journeyed even farther, past the exoplanets at the edge of our solar system. Facts were shared abundantly – some that I remembered from childhood and others that were deliciously new to me.

In the Rocket Garden, too, we experienced a moment of discovery and intrigue. Between the oxidizing exhibits was a “whisper dish” – a pair of curved metal dishes that resembled early-2000s satellite television dishes spaced about 30 ft apart. The informational sign explained that if I stood in front of one and my husband in front of the other, we could whisper to each other across that great distance.

I was skeptical. After all, the paint on the dishes was peeling as readily as it was on everything else.  But we took our positions and – it worked! The curvature of the dishes focused our soundwaves – our “hello”s and “I love you”s and other silliness – and caught them on the other side. For the first time that day, I felt the tickle of “Eureka!” within my bones.

I held onto that ember as we toured the Davidson Center for Space Exploration. In the shadow of a massive SA-550D Saturn V rocket were objects that connected me to a time and place that lived not only in my imagination. There were futuristic picture books written by Werner Von Braun that reminded me of the ones I’d leafed through in the public library as a kid. One display held the Apollo 16 Command Module, which traveled to the moon and back in 1972. Nearby was one of the numerous moon rocks collected on that mission.

They had been there. They bridged space and time.

The Stuff of Dreams

For so many like myself, rocket ships and space travel is the stuff of dreams. But my long-held love affair with Space Camp died the day I returned to the US Space & Rocket Center.

As we drove away in search of a quick bite to eat, I mourned that loss. One of the last vestiges of my childhood had departed. I put in my earbuds, revisiting a podcast about Werner Von Braun. But if the human mind has but a limited capacity for dreams – though I doubt it does – then I knew that a slot had just opened for some new adventure yet to be uncovered.